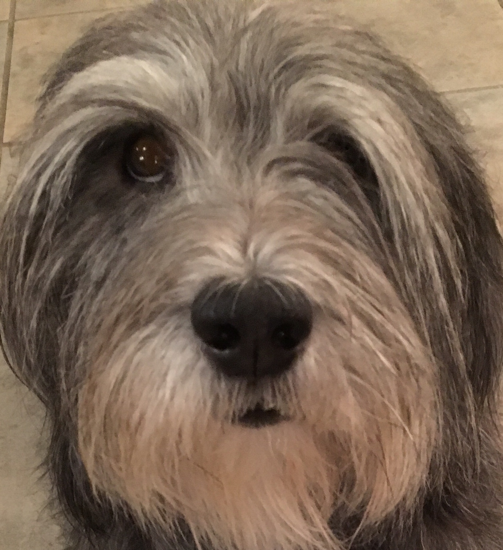 Well, well.  Now isn’t this interesting. Yesterday I reported on the most popular dog names in the US. And now the list has come out in the UK.  The top name for boys was Alfie and the top for girls was Poppy.  So the top names are different in the two countries.  BUT – both of the top names in the US – Max and Bella DO appear in the top 10 list in the UK.  Two other boy names appear as well – Buddy and Charlie and three other girl names are the same – Daisy, Lola and Molly.  A name that appears in the US list as a girl’s name, Bailey, appears in the boys’ list in the UK.  So the bottom line – there are LOTS of dogs named Max, Bella, Charlie, Bailey, Buddy, Daisy, Lola and Molly in this world.  Now we just wait for the European stats to come out… I bet Balthazar might be in that list.

So what’s new on the home front… My human received a text from a very dear friend the other day.  It started like this…”My sweet experienced dog vomit expert…”  It seems my human’s friend has a dog who was having some gastrointestinal issues.  Long story short – it is now getting better.  My human chuckled when she saw her new title.  She proudly carries that title .  That and poopologist.  She is wondering if she can advertise her expertise in these areas.

And speaking of poop – I don’t think I have ever talked about a strange habit the FG has with regard to poop.  I’m not referring to his habit of walking while pooping and leaving a trail – like Hansel and Gretel leaving a trail of breadcrumbs.  Nope. I’m talking about poop kicking.  You see, sometimes when the FG poops on our trail, my human will simply kick the deposit off the trail into the woods.  I mean, it’s organic – and better breaking down in the woods than in a plastic bag in a landfill.  At least I think so.  However, when my human attempts to kick the deposit into the woods, the FG goes CRAZY.  I mean totally nutso.  He jumps on her, pulls the leash, and goes out of his MIND.   What’s up with that?  It’s not like she is kicking it at HIM!  He REALLY does not like her to kick poop.  Mind you, it can be a bad decision sometimes… good thing she wears dog walking boots.  Maybe he is just warning her about consistency…

OK, enough talk about poop.  It’s FRIDAY!  Let the weekend begin.  Hope yours is NOT poopy!

Have a good one  Peace and paws up!