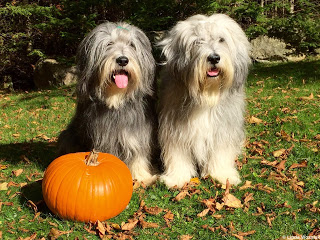 October 25.  Pumpkin Day!  A day to celebrate those orange members of the squash family that become VERY popular during this time of the year. Pumpkins are believed to have originated in North America – but they are grown the world over.  Except for Antarctica.  I guess penguins don’t make jack-o-lanterns.  In Britain and Ireland,  there has been a long tradition of carving vegetables into lanterns at Halloween and they were originally turnips.   But apparently pumpkins were first used in North America for jack-o-lanterns. 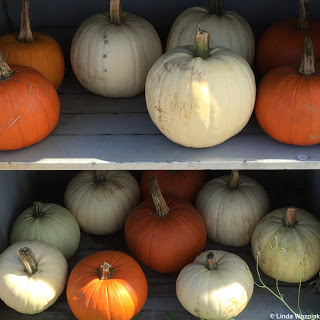 In 2014,  Beni Meier of Switzerland set a World Record for HUGE Pumpkins.  His pumpkin weighed in at 2323 lbs!!!!  I’m not sure if that record has been broken yet this year.  A cool pumpkin fact – it was Howard Dill, a NOVA SCOTIA farmer, and 4 time World Champion for huge pumpkins, who developed the famous “Dill’s Atlantic Giant” seeds which have produced many of the world-record pumpkins.  Those pumpkins routinely weigh more than 1000 lbs.  A jack-o-lantern from one of those pumpkins could light up a small town.
Another pumpkin fact – pumpkin is EXCELLENT for us dogs when we are having dietary problems.  My human always has a can handy – JUST in case one of us gets….hmmmm….how do I say this….soupy poops.  Now be careful to use the PLAIN canned pumpkin – NOT the sweetened pie filling stuff.  That might lead to MORE problems.   My human has also used pumpkin if one of us canines has put on a few extra lbs!  She had her first Bernese who became a bit portly.  So she reduced his food but added pumpkin – so he felt full – and he quickly took off those added lbs.  Pumpkin is a WONDERFUL additive! 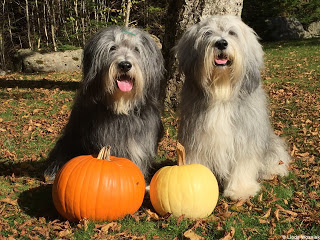 So celebrate pumpkins today.  And make your dog take a picture with one! And post it to my Facebook page!   So I can see other dogs whose humans made then sit with a large orange squash.  And look like we are having fun….Even though these things are too big to retrieve.

Not that we didn’t try…