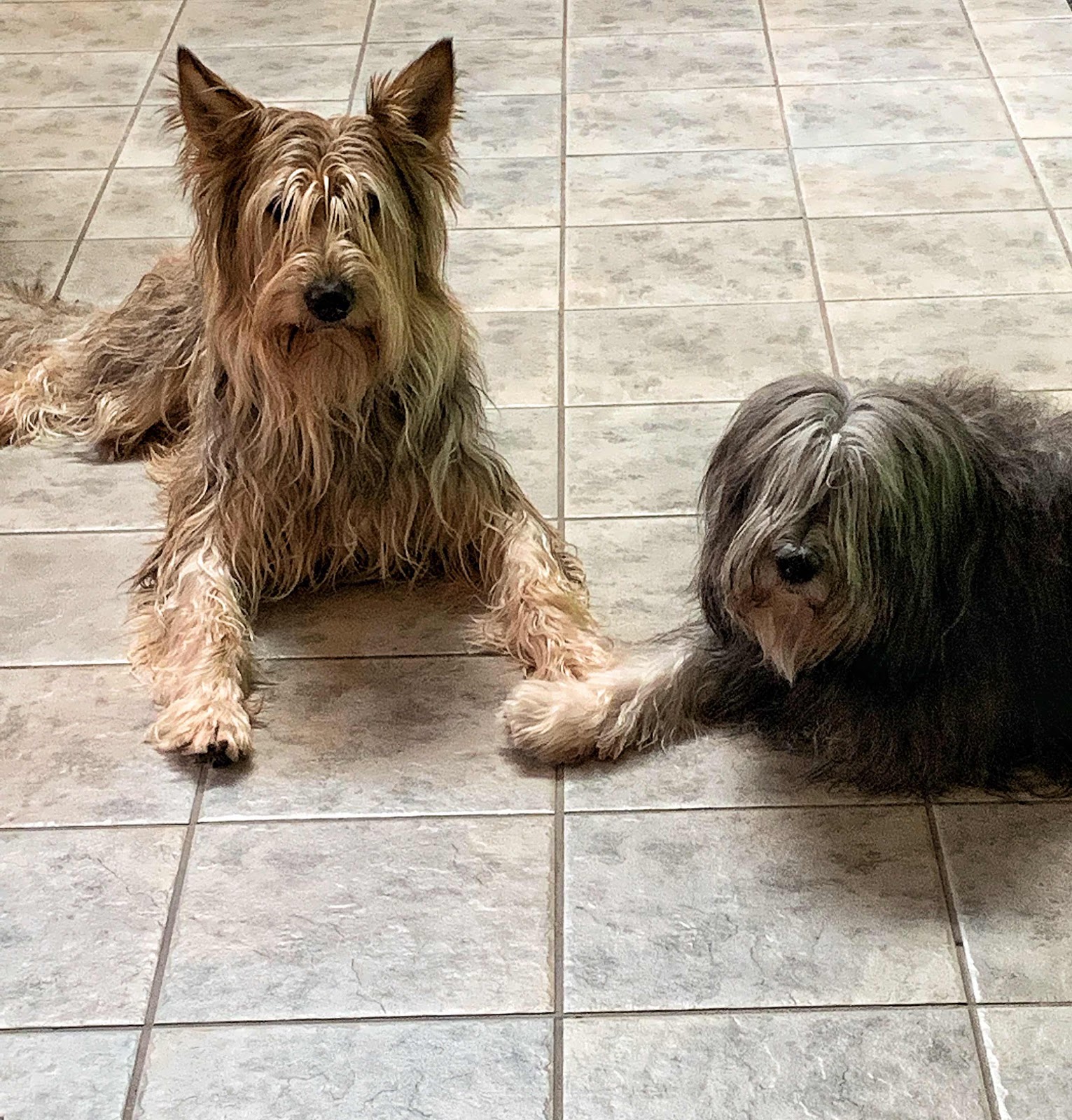 Excitement in the ‘hood.  Times three. And no – not us three.

First there were the visitors the other night.  One of our neighbors saw not one but TWO bears in their yard.  They think it was a mother bear and her cub. We’ll be making a big racket to steer clear of those two.  Where’s a Karelian bear dog when you need one?
Then yesterday morning, after we had been out for our walks, one of Pig Pen’s human’s was walking on the road on her own and she texted that she saw a deer at the end of our driveway.  In the past, I have referred to her as Mother Nature as she loves animals – and was in on the baby bird rescue.  Here is the series of text messages that then began to flow:
Mother Nature:  Deer looking at me at the top of your driveway right now….OMG. It’s chasing me !!! 😱. In Mary’s garage hiding.
My human:  You.  Or the deer?
Mother Nature.  Me. I don’t know what to do.
My human:  It chased you down the driveway? Where is it now?
Mother Nature:  Yes. Come out to your driveway.
My human: I’ll come with a dog.
(At which point my human grabs a leash and Einstein.  She figured he would LOVE this.  He starts boldly walking up the driveway toward the road.  With his chest all puffed out. As IF he knew what was going on)
Mother Nature:  I will come out of Mary’s garage
My human:  Walking
In the meantime, our other neighbor Ellen had also come to rescue Mother Nature, so by the time my human and Einstein got to the road, Bambi was gone.
A half hour later, more texts flowed.
Mother Nature:  Thanks Ellen and Linda for coming to my rescue!!!
👍🏼🙏🤗
My human:  Yeah.  I’m not coming if it’s a bear.  OK.  OK.  I’ll come.  Frodo makes enough noise to scare off a mountain lion.  I’ll bring him.
Ellen:  I’ll bring the rabbits. (We have a large number of bold bunnies in the ‘hood right now.  They will literally stay within 12 feet of us- of course only if we are on a leash).
My human:  You and Viktor can bring the rabbits….
After that, Mother Nature looked out the window of her house- and guess who she saw?!  The deer.  He is stalking her.  Actually, it is probably a “she” as it has no antlers.  And it is reportedly not very big… Now Mother Nature can’t leave her home.  Just kidding.  About not leaving her home.  Meanwhile, Pig Pen, the docile, friendly Lab couldn’t care less.
Don’t you just WISH you lived on our road?!
Excitement number three is company!! My human’s mother’s cousin and his wife arrived from Buffalo!  So that’s my human’s first cousin, once removed. She had to look that up.  Anyway, they are great people – and what’s additionally cool is the fact that he is … I hope he doesn’t mind me sharing this – but he is 90 years old.  90 going on 65.
We didn’t get to see them yesterday- as they got in late in the afternoon and they aren’t staying with us.  But I’m sure we will see them today.  Her highness said we must be on our best behavior.  Whatever that means.  I guess no jumping.  Which Einstein and I can do.  The FG will need to be held.  He gets a BIT too enthusiastic at times. As for no barking- why even pretend we can comply.  That’s where the FG shines.  We like to spread the bad behaviors around.
Anyway,  lots of excitement here.  Never, ever a dull moment.
Have a good one. Peace and paws up.
Seizure free days: 3

One thought on “Excitement.”