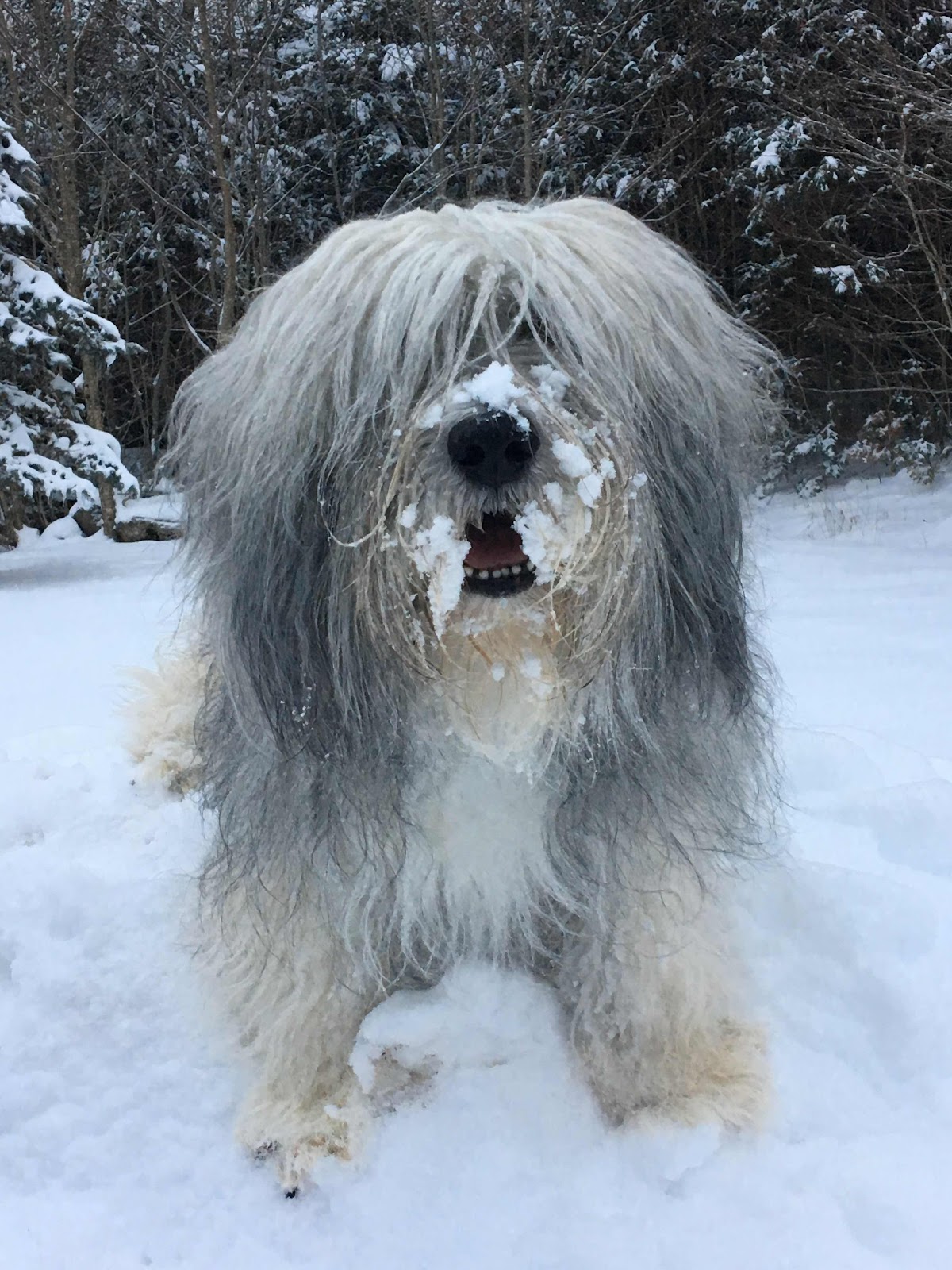 So Tuesday was an interesting day.  My human was on a super clean-a-thon, so we knew something was up.  Super cleaning generally means company. That’s different than the usual dusting and vacuuming that happens at least once a week – when the dust bunnies begin to become chase-able.  Super cleaning includes floor scrubbing, and the fastidious removal of canine olfactory art.  From windows, doors, cupboards, walls, ceilings.  OK.  Not ceilings.  Mind you there probably IS some dog slobber on some ceiling from us shaking our heads after drinking. Especially from the FG.  Because he is taller.  His DNA is EVERYWHERE.  After he eats, as well, it is critical that he rub his face on any and all vertical surfaces.  And on carpets.

Anyway, we watched my human as she cleaned.  She would pick up our assorted toys and bones, put them in the big copper boiler to store them, turn around to get the vacuum, only to turn and see that we were already removing the toys and bones she had just put away.
Then we would want to go out, after she finished vacuuming,  and we would bring in an assortment of leaves.  And snow.  Yes – we would bring both.  Vacuuming with dogs is futile.  Kind of like trying to drain the ocean with a paper cup.
The cleaning day wore on.  She fed us our supper and then in a cheery voice, told us to come in the bedroom.  Fellow dogs- always beware the cheery voice. We went in, and before we could turn around, she was putting a rickety gate across the doorway.  She said we had to stay there and behave – not everyone appreciates jumpy canines.  Who the heck is this “everyone?”
Well it turns out it was a date.  A big, tall dark- haired  man.
Just kidding.  No point in fabricating that story – everybody knows April Fools Day is over.  No – it was her “Book Club.”  She just joined this group a few months ago – and it was her turn to host.  Wonder if all the other women spent as much time cleaning when they hosted.
When the first group of ladies arrived, one asked if she could say hello to us.  “Sure” my human said – while her mind was racing about who was going to knock down the gate and race into the DFZ to steal the cheese log.  My human held the gate, but that’s when I realized the mesh was loose. I immediately tried to burrow my way through.  So my human is holding my head and the gate, Einstein is barking and the FG is leaping up and down.  The first woman walked away after the raucous introduction – and now another one came to say hello.  Over the blasting of Einstein’s barking my human answered the usual “what are they” question.  Again I tired to squirm through the mesh- while my human pushed me back. The second woman went to the living room. My human gave us the stink eye and said “sit.”  She ran to the kitchen, grabbed some treats and flung them on the floor.  While we were gobbling them up she turned the gate so the loosened mesh would no longer be at floor level.  Secure again.
She joined the ladies for the discussion that was just about to begin.  That’s when the usually quiet Picard began squeaking.  Loudly.  Constantly.  She excused herself- went to the bedroom, said “settle down” and went back to the group.  Five minutes later, Einstein starts barking.  She excuses herself again and again (with the stink eye) says “settle down.”  The discussion continues.
Ten minutes later, she can hear the gate being rattled.  She knows all it will take is one good punch – and it will be PONdemonium.  She sneaks out AGAIN.  She “pretends” to throw treats – (which was pretty sneaky) and as we all turn around, she CLOSES THE BEDROOM DOOR.
Initially we were all in shock.  We lay down and were stunned.  My human listened and breathed a sigh of relief.  Peace.  At last.
About a half hour went by, and that’s when Einstein decided he had had enough. Remember- this is the dog who does not like to be “contained.” He basically slammed against the door- so loudly that it literally caused the book discussion to stop – and everyone looked at my human.  “Is everything OK?” someone asked. My human nervously smiled and said “oh he’s just trying to get out.  He’ll be fine.”  She was secretly saying a prayer of thanks that he couldn’t open the door.  Unlike another PON she knows.  Zan can open doors that have a lever handle. Luckily we don’t have those.
Einstein resorted to throwing himself at the door again – like a cop breaking into a felon’s hideout.  He stopped when he realized it wouldn’t work.
As the evening wore on, we eventually did settle down.  Although every twenty minutes or so, Einstein would let out a bark or two – just to remind my human that we were in there.  And alive.
When everyone left, my human cleaned up the dishes and put away leftover food.  And then she FINALLY released us from our bondage.
Now despite the unwanted sequestering- there WAS an upside to the evening.  Which actually extended into the next day.  One word that made it all worthwhile:  leftovers.  Veggies.  Cheese.  Fruit.  While the FG proceeded to toss his carrot sticks around the dining room, Einstein and I gobbled down our fill.  And the FG’s if his toss went the wrong way.
For some reason, my human doesn’t remember much about the discussion from that night.  Her  next turn to host won’t be for months.   Einstein is already planning his escape.
Have a good one. Peace and paws up.
Seizure free days: 8