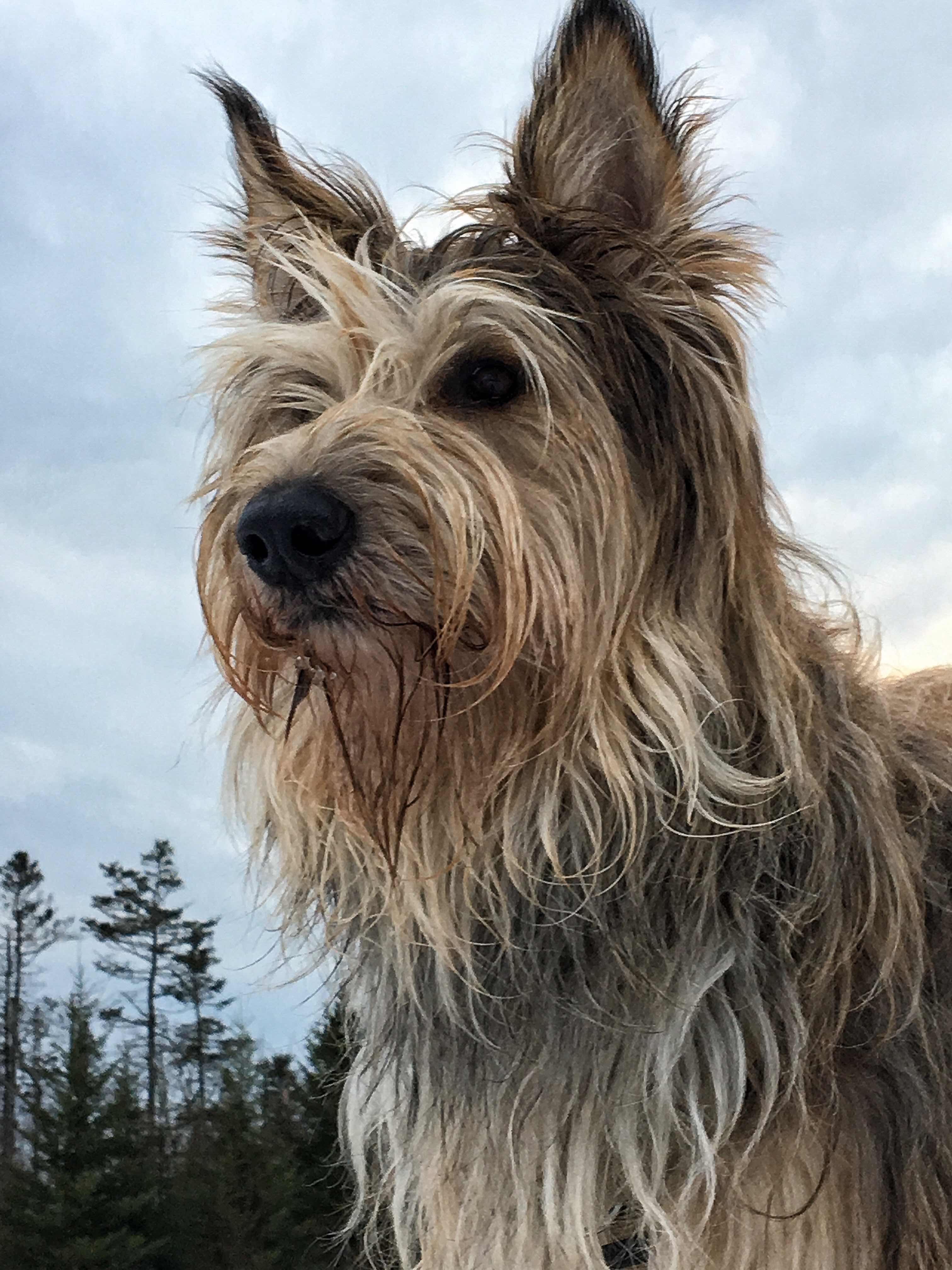 Yesterday we got my human up at 5.  She took us out, fed us, had her breakfast and went back to bed after I had my medication at 7.  I think we have a new routine.

She spent the better part of the day cleaning out her email.  Really.  It took hours and hours.  In dog time it was probably equivalent to three days.  She finally finished mid afternoon and then announced that she needed to get groceries.  And one of my medications.  So she abandoned us for about 2 hours. When she returned, she announced that she was taking the FG up to the golf course for a long walk.  He needed it- he was walking around squeaking.  So off they went.
Now you need to keep in mind that we had icy weather for quite a few days and then the day before yesterday, we had about an inch or two of snow to cover the ice.  Yesterday the temperature was just above freezing-so the ice was now slushy.  In spots.  Some areas were deceiving- they were solid ice- so she had to tread slowly with the FG.  Slow is not a favorite word in his vocabulary, but he IS getting better.
As they made a loop and were heading for home, you KNOW she had to take a few photos.  The FG planted himself on a rock and was surveying the surroundings as my human got down on one knee to take the above photo.  And all was FINE – until she decided to toss a branch to get his attention.  BIG mistake.  He jumped off the rock and before my human could stabilize herself, he was off.  She of course, dropped the leash.  And he was GONE.  The frenzied gazelle with the leash in his mouth ran around the bend in the path and was out of sight.
My human couldn’t run after him – for fear of hitting an ice patch – so she hid, praying he would come back.  And probably 30 seconds later, he did just that.  But he knew she was hiding – so he stayed in the middle of the fairway- well out of catching distance.  He spotted her and raced across the fairway.
And then she did the only thing she could think of.  She lay down in the snow.  And just looked at him.  He in turn lay down on the other side of the fairway on a hill.  Watching her.  She pretended she was crying.  He just watched.  She could just picture what this scene looked like.  She’s watching him and he’s watching her.  It seemed like hours went by – but it was probably two minutes.  And she didn’t want to get up because she KNEW he would take off.  Her pants were starting to get wet.  But she didn’t want to move.  And he just kept watching.
Suddenly he got up.  “Uh oh” she thought.  But he didn’t take off- he came racing at her like a freight train.  When he landed on her he nearly knocked off the new glasses she just got last week.  He jumped on her, kissed her, and was SO crazy she had a hard time getting up!  But she was THRILLED.  She would rather have a concussion from him jumping on her than one from falling as she chased him.  Go figure.  She just needs to start wearing a helmet when she walks him.
After the reunion- they continued home. Then she got to take Einstein and me out – but we just did a loop of our property- and we didn’t take off because we knew it was supper time.
So that was our Monday.  Today Ludwig has to go in for some service because of some kind of recall.  I think she should take us with her – so the service guys do the job really quickly. We’ll see…
Oh.  And by the way.  The rodent SAW HIS SHADOW- so he raced back into his house.  Which means 6 more weeks of winter.  Meanwhile, his colleagues elsewhere forecasted an early spring.  I’m not too worried.  According to one source, these overgrown squirrels have a forecasting accuracy rate of 37%.  We PONs are MUCH better than that!
Have a good one.  Peace and paws up.
Seizure free days: 3