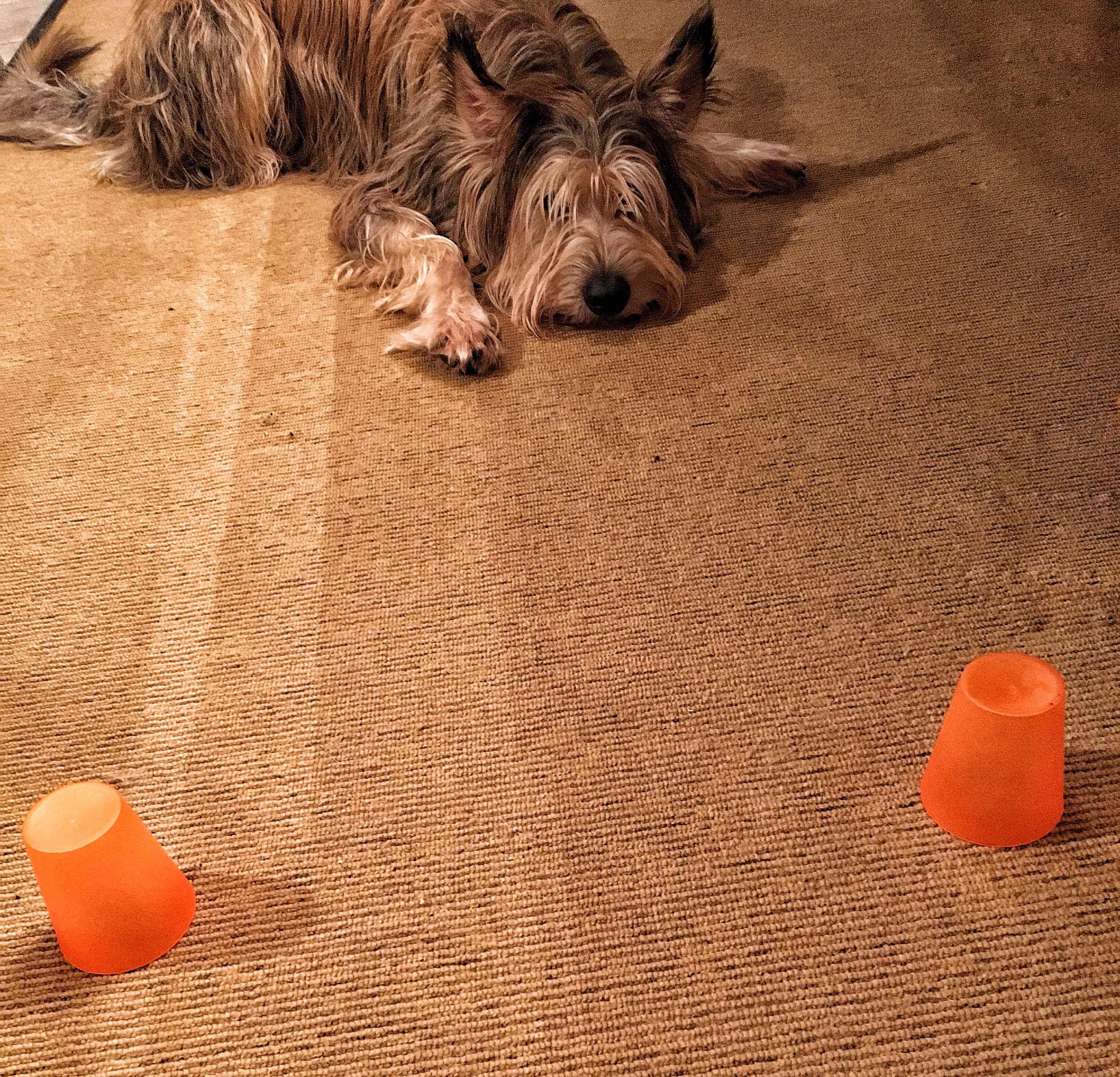 January 19. And according to the crazy calendar, today is also Good Memory Day. The timing is perfect- because my human just read an article in Psychology Today that looked at dog intelligence.  They did a study at the University of Arizona, and they concluded that bigger dogs are smarter than smaller dogs. ( Now don’t shoot me – I’m just the messenger on this one.  ). And the results were particularly interesting in a test of memory.

The study looked at data that was reported by humans owned by dogs –  through the results of an on-line “intelligence” test. The test has the dog perform a number of exercises.  And while there ARE limitations to this study – one exercise that measured “delayed memory” showed a definite trend toward better memory in bigger dogs than in smaller dogs.  The exercise required the following:
A dog was shown a treat and then it was placed under one of two cups.  With the dog watching.  The dog had to then wait for four different time periods and at the end of each time period was released to find  the treat.  They said that four trials were done – I am assuming four times for each of the time periods of 60, 90, 120 and 150 seconds.
You, of course, know what comes next.  We had to test the theory.
My human started with the FG. She put him in a “down stay” and showed him the treat.  She then covered it with a cup and put another cup a few feet away.
You know how when you are late for something, and you have one minute to do something- and that one minute FLIES BY?   Yeah- well one minute when you are waiting with a dog in a “stay” somehow goes MUCH more slowly. The good news?  The FG pretty much stays where you tell him.  I was not nearly as patient and Einstein was the worst.  He kept squeaking and breaking his down.  The only dog in this house who has an obedience title.  Go figure.
So the results?  I bet you are all thinking that we chowhound PONs with the great memories would ACE this exercise.  While the non-attentive non-food liking Picard would fail.  Well I am here to tell you – we PONs blew it. For the 60 second time period , Einstein and I only scored correctly on 1/4 trials.  The FG?  Who almost looked like he could fall asleep waiting?  4/4.
The FG tried the 90 second exercise and got 2/4.  When they got to 120 and 150 seconds, he failed the initial trial for each time period and was CLEARLY getting bored- so they didn’t do the 4 trials for those times.  Given our abysmal performance at 60 seconds, my human didn’t even bother to try the longer times for us.  I think that was a mistake.  Maybe we just thought it was too easy – so didn’t pass at 60 seconds because we weren’t even trying.  I bet we would have been bang on at 150 seconds.  Sure we would.
So with our limited data and sketchy methodology, our results concluded that the bigger dog in this house is smarter – or at least was for this exercise.  I am demanding a recount.
I think it’s interesting that my human can give the FG kibble to search for while she walks me and Einstein each day. And I cannot WAIT to get in the house, knowing that he likely didn’t find every kibble.  I remember it was left out.  And our walk takes longer than 60 seconds.  So one would THINK I have a good memory.  Perhaps it’s the routine – but my human knows that we DO REMEMBER things very well.  So why we failed so miserably- who knows.
Let me know if you try this out. And if you have several dogs of different sizes, see if the bigger dogs do better.  Given this theory, Bucket Head should have been a genius. Adorable, loving, sweet-yes. But super smart?   Remember, he’s the one that swallowed my human’s sling.   Mind you… I eat dryer lint….
Have a good one.  Peace and paws up.
Seizure free days: 3
Here’s the link to that article:
https://www.psychologytoday.com/us/blog/canine-corner/201901/are-big-dogs-smarter-small-dogs?amp