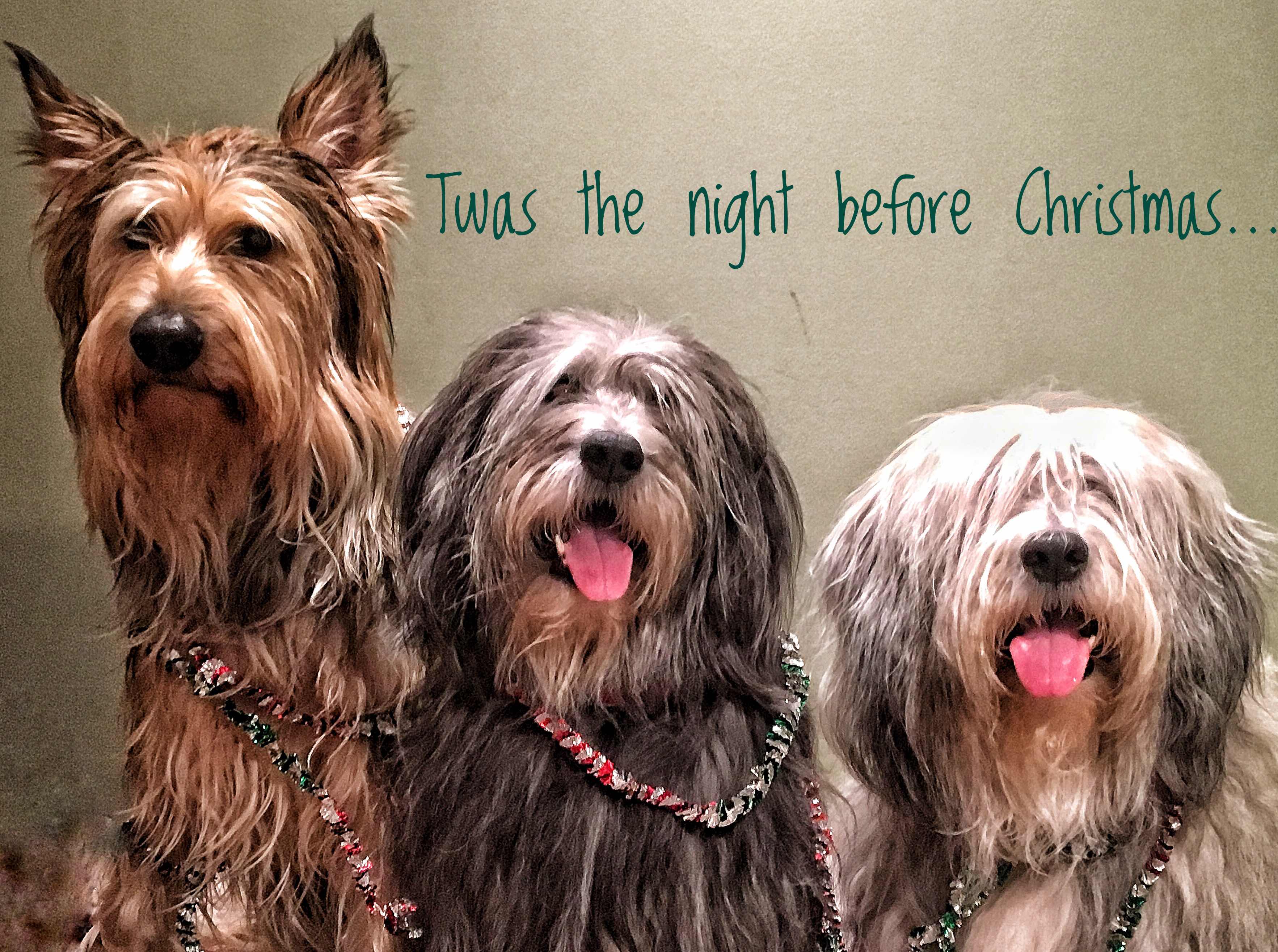 OK loyal blog readers, I am again plagiarizing my own material.  Time to pull out that famous poem  – and publish it again.

The poem, A Visit from Saint Nicholas also known as The Night Before Christmas was written by Clement Moore.   As you may recall from the last two years, I took Clement’s version – and modified it. It’s the canine version.  And I updated it again for this year.  This goes out to all those canines and their humans who read my blog – and my apologies in advance for the many names I am missing!!!!!  I cannot tell you how long my human poured over Facebook pages trying to find dog names and I KNOW there are others who read my blog who I undoubtedly missed-  please know that I appreciate each and every one of you.  Those not appearing in the poem will appear in another blog.  My human got through the upgrade and then started thinking she didn’t even want to post it – because she is so afraid that she missed someone!  The tricky part is that some of you post pictures of your dogs – and then don’t post a name!  Really!!!!!!!  Perhaps she should list all the human names instead of the dog names.  But that would make this poem very strange…I should also note that we were also running out of dog commands…

In some cases, some of the dogs may no longer be with us – but they are still in our hearts – so they remain in the poem.  I also appreciate those humans who aren’t currently owned by dogs – who read my blog!  And remember – if you ever feel the need for a dog fix, I am available for rental.  My human says she pays YOU to take me….

So here we go…

‘Twas the night before Christmas, when all through the house
3 canines were waiting for something other than a mouse.
The stockings were hung by the chimney with care,
One had been chewed – so the toes were quite bare.
Two dogs were nestled all snug in their human’s bed,
While visions of dog treats danced in their heads;
And their human in her jammies, and Elroy in his crate,
Were feeling rather stuffed from all the cookies they ate.
When out on the lawn there arose such a clatter,
We raced to the door to see what was the matter.
Then away to the window we flew like a flash,
Barking and growling, a chair fell over with a crash.
The moon was shining on a pile of snow
Because it was dark out, the yellow parts didn’t show,
When, what to our wondering eyes should appear,
But a sleigh pulled by dogs, instead of reindeer,
With a jolly old driver and those dogs, so lively and quick,
We knew in a moment it must be St. Nick.
As rapid as greyhounds – those happy dogs came,
And he whistled, and shouted, and called them by name;
“Now, Meg, now Wookie! now Hally and Chimo,
On Romi! on Zan! on Murray and Stacio!
Hurry Bisia, hurry Miri, hurry Vulcan and Fudgee,
Quickly Taz, quickly Jackson, quickly Edan and Oly!
Wait Moo, wait Flicka, wait Rigger and Milo,
Stay Wiggles, stay Nara, stay Edy and Solo!
Down Hattie, down Gidget, down Doman, and Fred,
Sit Bella, sit Conner, sit Watson and Ed!
Come Sophie, come Thor, come Gatsby, and Beau,
Roll over Gipsy, roll over Dorey, roll over Kiszka and Flo!
Jump Maddie, jump Liam, jump Ares, and Tip,
Speak Romeo, speak Dudley, speak Logan and Jip!
Go left Arwen, go left Dixie, go left Nelson and Jack,
Whoa Lafayette, whoa Miranda, whoa Shadow and Mac!
Go right Merlot, go right James, go right Chievie and Mia,
Stop Takoda, stop Sherlock, stop Jessy and Tia!
Easy Dusza, easy Vera,  easy Brandy and Diva,
Fetch Meadow, fetch Henry, fetch Jasmine and Lusia!
Free Creidim, free Buzz, free Letty and Bree,
Seek Moril,  seek Piper, seek Luzie, and Lee!
Break Ona, break Risque, break Gizmo and Teddy,
Leave it Banjo, leave it Scout, leave it Beckett and Eddie!
Drop it Garcon, drop it Antek, drop it Baxter and Flash,
Take it Wally, take it Yeungling, take it Neptun and Dash!
Over Ona, over Merida, over Red and Holly,
Stand Goro, stand Phronsie, stand Hector and Molly!
Off Mulli, off Gosha, off Ella and Maisey,
No Levon, no Hector, no Usha and Daisey!
Out CC, out Ammo, out Mara and Ally,
Place Heidi, place Greyson, place Teigan and Sally!
Yes Hugo, yes Goldie, yes Jazz and Fanny,
Bed Bosley, bed Ziggy, bed Chester and Danny!
Now over the broad jump! Over the wall!
Now dash away! Dash away! Dash away all!”
So up to the house-top the happy dogs flew,
With the sleigh full of Toys, and yummy biscuits too.
And then, in a twinkling, I heard on the roof
The barking and squeaking and each little woof.
As I drew in my head, and was turning around,
Down the chimney St. Nicholas came with a bound.
He was dressed all in fake fur, from his head to his foot,
And his clothes were all covered in dog hair and soot;
A bundle of Toys he had flung on his back,
He looked a bit frightening and Frodo wanted to attack.
But his eyes—how they twinkled! his dimples how merry!
He looked very friendly, he wasn’t so scary!
He looked at all 3 of us with a smile and held out a treat,
We happily took it – we’re always ready to eat!
He spoke not a word, but went straight to his work,
And filled all the stockings; then turned with a jerk,
We were all sitting patiently, watching in awe,
Our tails wagged in unison as we each gave a paw.
And laying his finger aside of his nose,
And giving a nod, up the chimney he rose;
He jumped in his sleigh, after his dogs had a pee;
No one ran away – it was something to see.
And off into the sky the amazing dogs flew
Their driver trusted those canines – they knew what to do.
And I heard him exclaim as they drove out of sight,
“Merry Christmas – behave Viktor – and to all a good-night.”
AGAIN – please accept my apologies if your dog’s name is not here. I think we need to start a database for this thing!!!
Have a good one!  Peace and paws up!
Seizure free days:   11