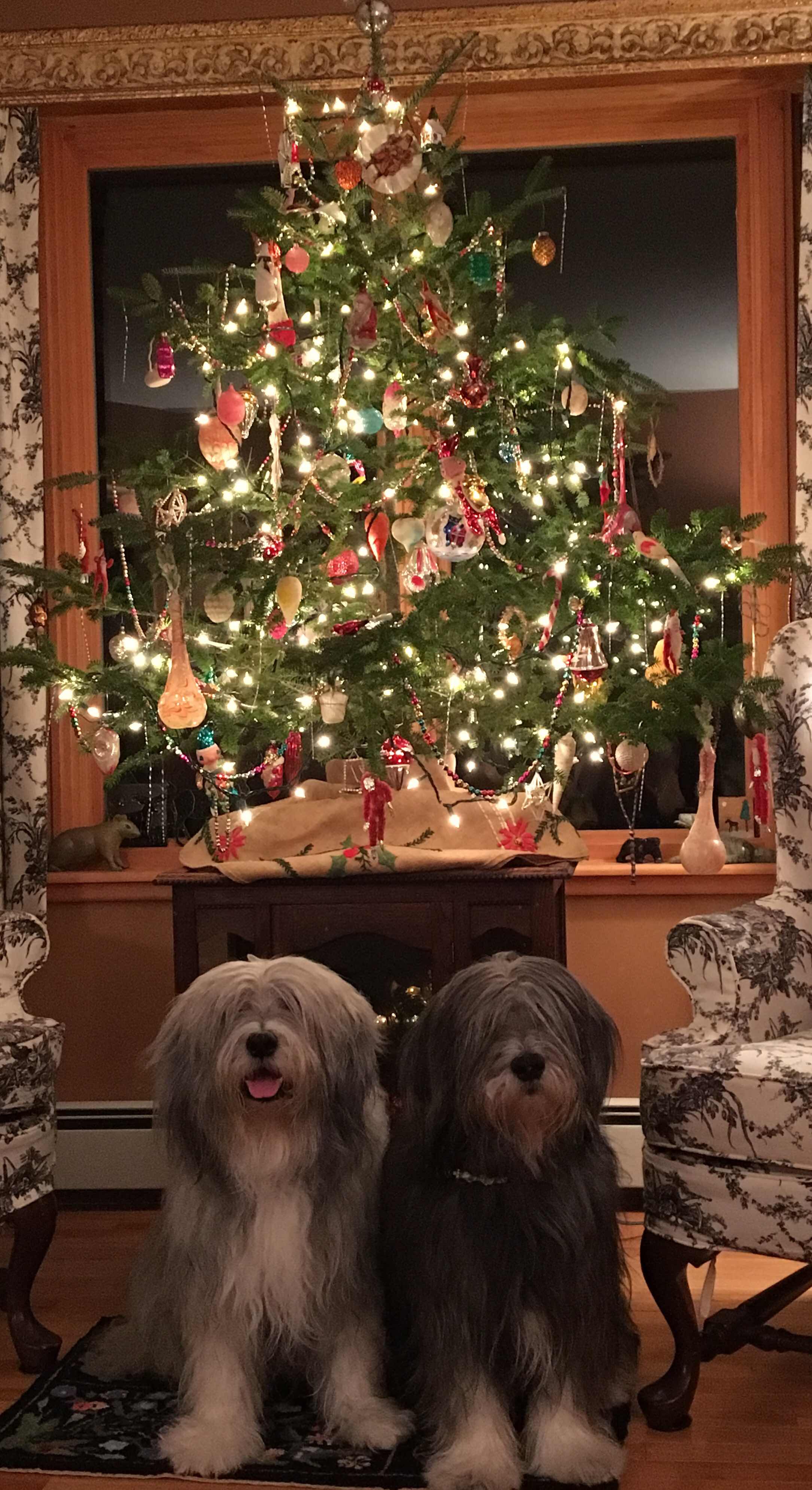 So every year we go through the week long agony of Christmas decorating. It’s agony for us because all we can do is sit and watch.  My human has been known for creating a “Christmas explosion” while we just roll our eyes. What’s the point of having trees indoors if you can’t pee on them?!

Anyway, this year she vowed that she wasn’t going to go crazy.  She opted NOT to put the dog tree up- which was what I consider a mistake.  That’s the only tree we really liked – with all the dog ornaments. But she said she was taking a break from it this year.  And then – the real shocker, she decided not to go to get a big real tree either! I think she still is suffering from the flu and isn’t thinking straight.
Anyway, she decided to go out in the woods behind the house, and cut down a little tree – which would be placed on top of a table.
She opted  NOT to take us on the tree hunt because we had  LOT of rain the day before yesterday- so she knew there would be LOTS of puddles.  Einstein and I didn’t care – we could survey from the back deck door.  At least while she was in view.  And Einstein barked out orders: “Not that one- it’s too big.  That one is ugly.  That one is a spruce and the needles will be off it before next week.”  The FG was dejected because he would have quite enjoyed running through the puddles.  My human didn’t need more work.
Anyway she emerged from the woods in a fairly short time.  She was carrying a small Charlie Brown table top variety and dragging a large stand-on-the-floor variety.  She couldn’t decide which she preferred.  She dragged the large tree to the middle of the back yard, dropped it and carried the mini version around to the front of the house.   And then she made her mistake. Or maybe I should say we helped her make her decision.  Quickly. We knew she was at the front of the house and all of us were barking like mad.  She decided to let us out.   Her mind ran in slow motion as she watched us run around to the back of the house. And as she raced behind us, she came around the corner and watched as each one of us QUICKLY peed on the large tree in the middle of the yard.  Decision made.
As we came back around to the front of the house, she wouldn’t let any of us run ahead.  I don’t know why she was worried- we made our choice – we wouldn’t pee on the little tree.  Then again…
No – it survived- and with a bunch of lights, garland and ornaments, the Charlie Brown tree looks just fine.
So.  House decorated.  Check.  Now to work on my list…
Have a good one. Peace and paws up.
Seizure free days: 9