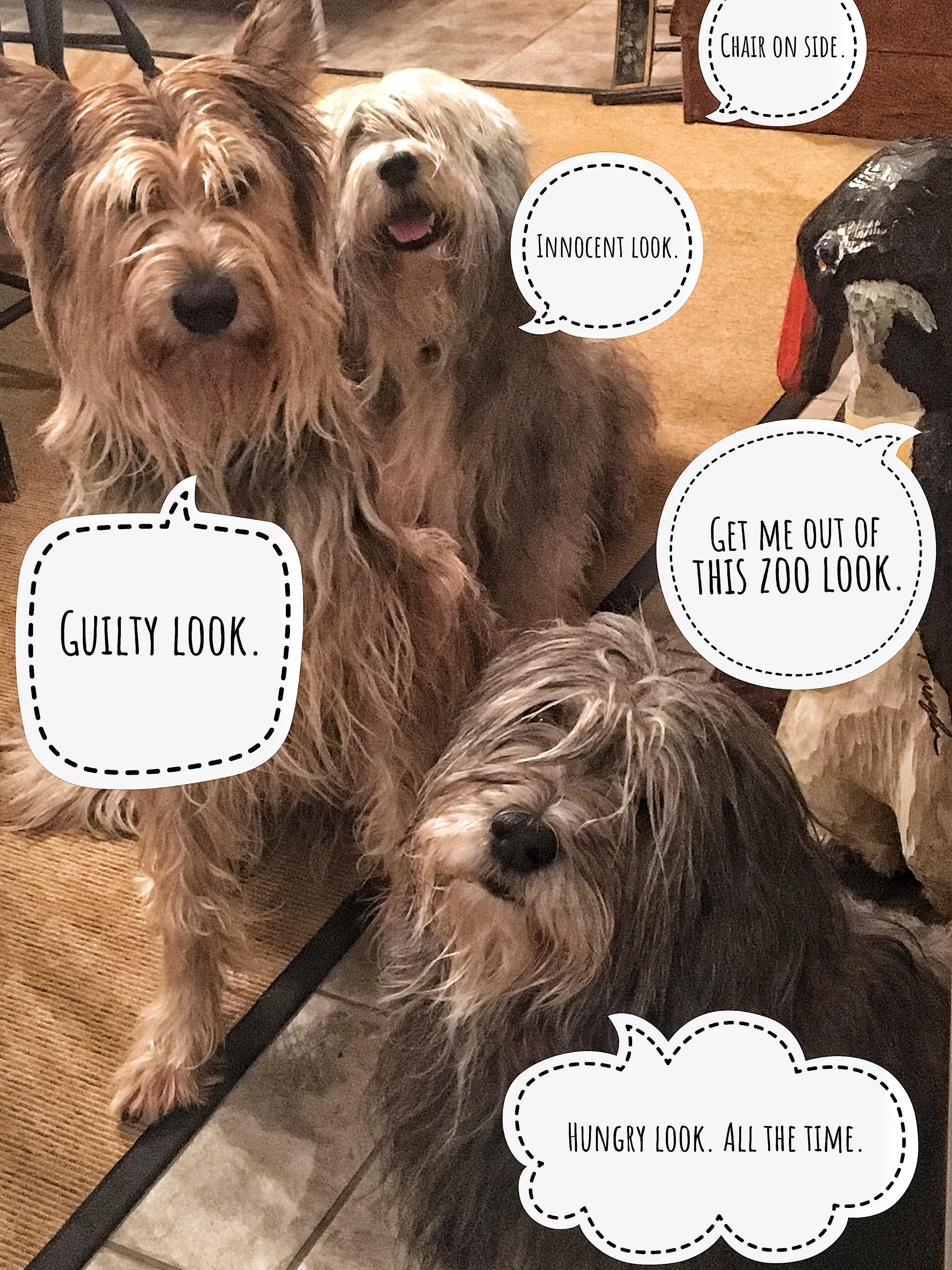 For those who don’t know our household well, we are not the only animals living here.  There is a beaver, a turkey, a loon, two geese, several ducks, two deer, many bears, multiple dogs, fish, rabbits, a heron, assorted other birds, at least one turtle, a puffin and a penguin.  Really.  We have our own zoo.

Luckily though, this menagerie does not need feeding.   They are all made of wood.  They are folk art.

Folk art is essentially art that is created by untrained individuals.  The artists didn’t go to school to learn  how to paint or draw, or carve things – they learned to do it themselves.  Sometimes is it pretty primitive. And most folk artists don’t intitally start out thinking that this is going to be a way to earn money – they do it purely for their own enjoyment – or maybe to give as a gift to another.  Nova Scotia has a LONG history of folk art.  I wrote about one of our most famous folk artists in another blog.
https://viktorsviews.blogspot.com/2017/05/a-lesson-from-maud.html

But in addition to Maud, there are plenty of people who still make folk art.  Many of the early folk artists were woodsmen, and fishermen – who looked for things to occupy their time in the off season.

While my human initially thought folk art was too primitive for her liking, she learned over time to appreciate the thought, craft and HUMOR behind many of the works.  And she appreciated the backgrounds on the artists – who did the art “just because.”   Years ago, she worked for fun at a folk art gallery.  This was while she also had her current job. She did it because she enjoyed the colorful, unique art – but also because she learned the stories of the people behind the art.

She enjoyed meeting the artists and working at the store.  Oh.  And did I mention she was PAID in folk art.  Hence the zoo.

After we endured the painting of the kitchen and dining room back in August, my human decided to “move things around” and “redecorate”.  The moving scheme included taking a large,  over two-foot tall penguin, and place him in the dining room.  From his previous location in the laundry room.  Yes.  There are animals everywhere.

The interesting thing about this penguin – he has long toenails.  Orange and yellow toenails. Made of wood of course. 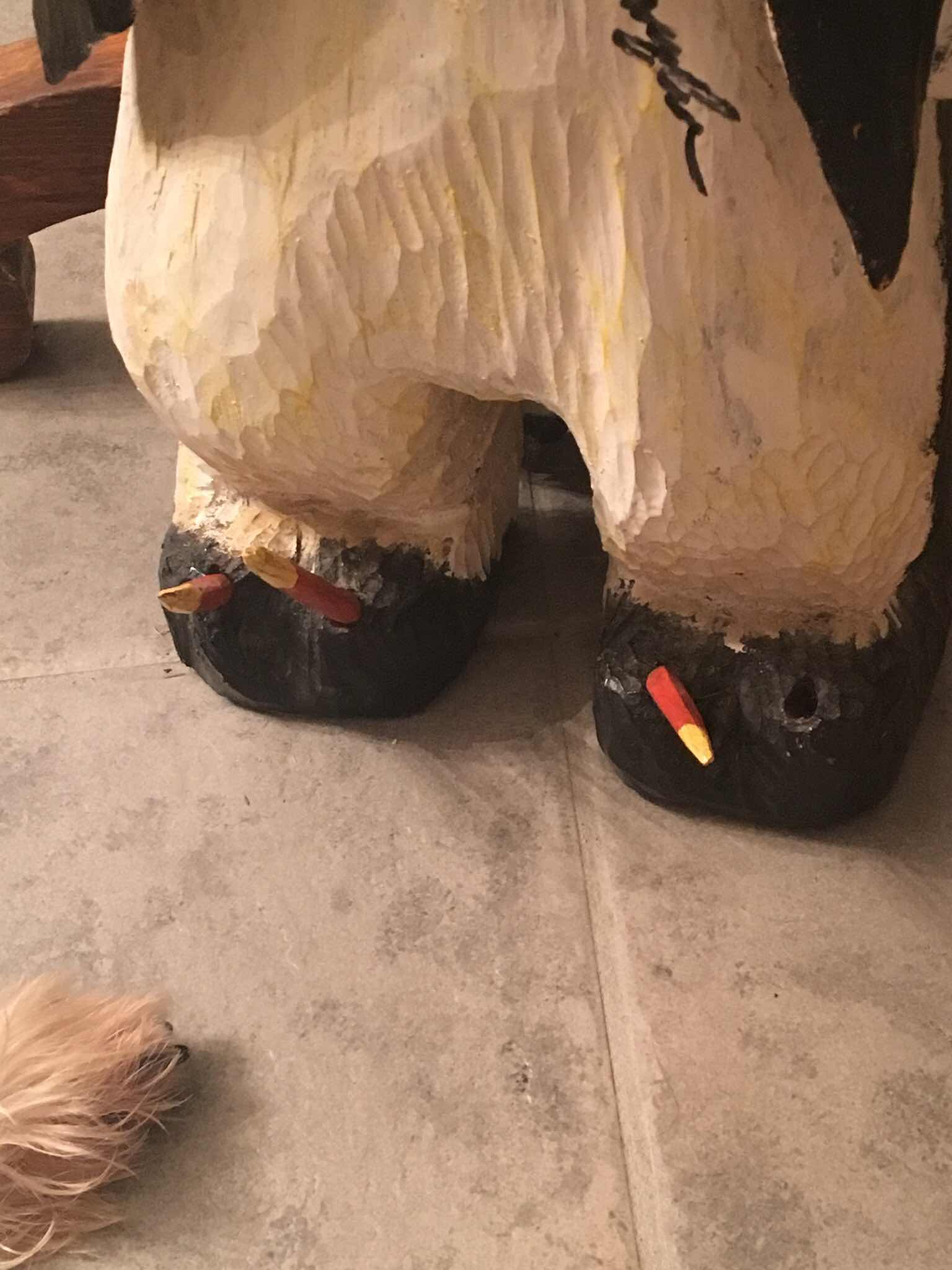 When Mr P was moved to the dining room, we all sized him up.  My human threatened that if anyone lifted a leg to pee on him, we would live the rest of our days in the laundry room.  Not that we pee IN the house – but you know us boys and “new” things – gotta mark them as our own.  Anyway, no one peed on the penguin.

However, about a week ago, my human noticed that one of the penguin’s toenails was on the floor next to him.  She wondered how that happened.  And then she noticed the FG sniffing it.  And he was about to pick it up when she shouted “NOOOOOO.”  He left it alone.

Fast forward (finally!) to Wednesday.  My human came home from work and checked the condition of the chair wall still lining the edges of the dining room carpet.  It always looks like there has been a brawl when you come in – with all the chairs lying on their sides.  Anyway, that’s when she spotted it.  The remains of the toenail.  The yellow part was gone, but about 3/4 of the orange part remained.  But WHO was the culprit? The obvious suspect was the FG.  But it REALLY COULD have been any of us.  So she turned to the snitch.  Big Brother.  And saints preserve us – that’s when she realized Big Brother had not been reset after the new internet was installed.  It wasn’t working.  No video evidence.  Phew.

She had to find some paint to touch up the shortened toenail.  In the process, the tube of paint opened at the wrong end, resulting in a blob of yellow paint on my human and on the table.  She just sighed.  Sure she did.  I believe I heard some rather colorful words coming from the garage.

In the meantime, the other toenails have been removed.  She’ll leave them off for a while in the hopes that whoever did it will not remember when they are again put back in.  How crazy its THAT.  Like WE will forget something. Does she never learn?

So that’s the penguin toenail story.  Just what you were expecting, no doubt.  I’m thinking we could probably start our own folk art.  After all, each of us is good with wood.  Just give us some paint.  Now wouldn’t THAT be fun?  While my human is at work…

Have a good one.  Peace and paws up.
Seizure free days: 56