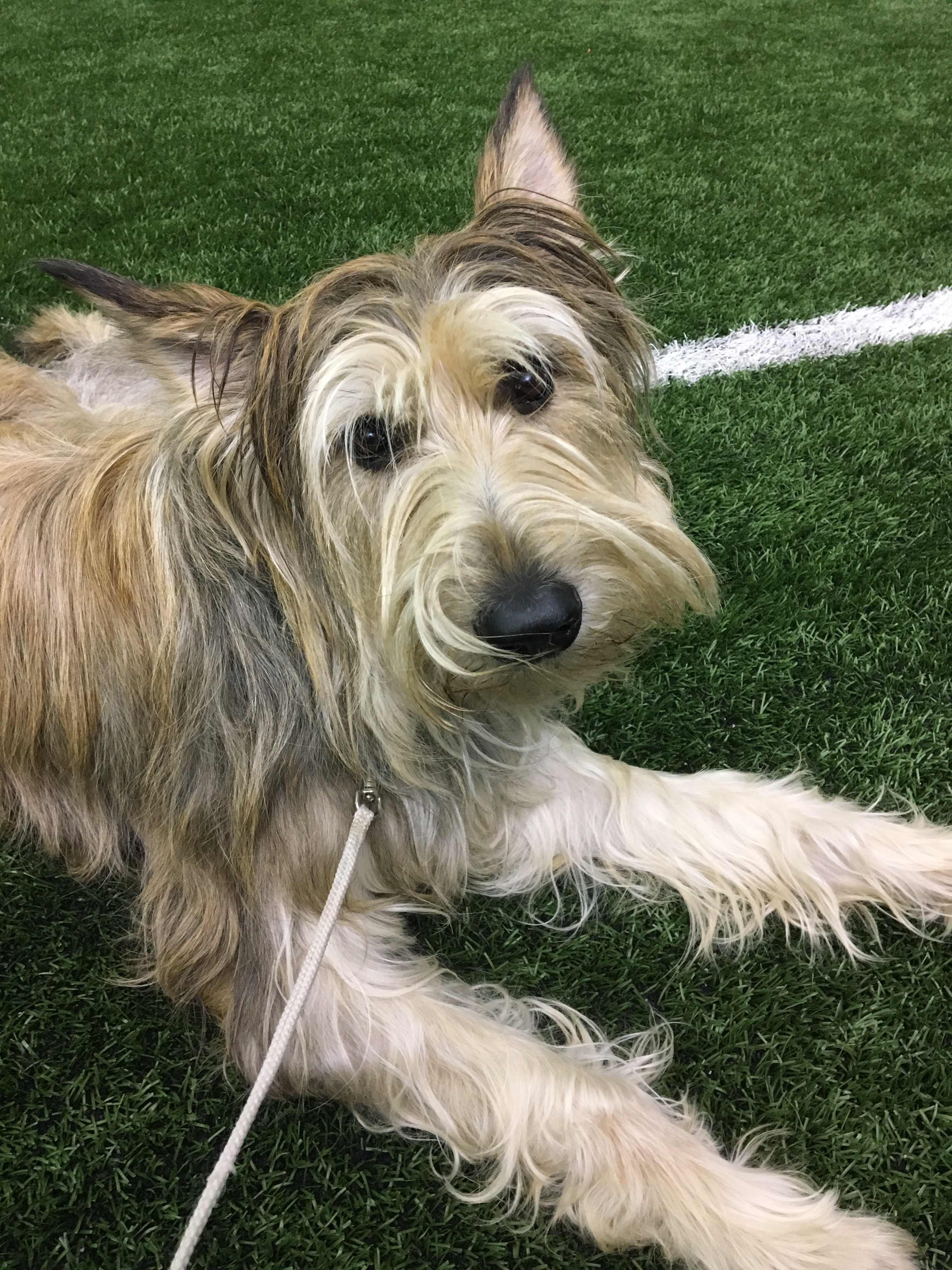 The things you don’t think about at a dog show….

So do you know what the term “overmarking” means?  It does not refer using a yellow highlighter pen too much.  Although it does have to do with the color yellow…

Overmarking  is that less-than-desirable habit that we dogs have of insisting on peeing where other dogs have peed before. Some say that dogs mark or pee in a particular place to mark their “territory “.  In this house, we all love the overmarking game.  Take one of us out, and we’ll pee. To be followed by dog number two and dog number three – all on the same spot.  Another idea is that we dogs have a social order – so we try to cover up or conceal where another dog has “made his mark,” in an effort to be “top dog.”  Or at least “top pee-ER”.
Overmarking is typically practiced by male dogs.  With us PONs, it is not unusual to hear my human saying “watch out- you are going to pee on his head!!!”  Pee Head is a common phenomenon around here.
So imagine if you have dozens of male dogs all together in the same place – all vying to be the top pee-ER.  Like at a dog show.  It can be quite “interesting.”  Dogs are NOT supposed to pee indoors- but heaven forbid one dog lifts his leg to mark a trash can… It can start a chain reaction of pee brain.  And outdoors- well it’s overmarking heaven.
Yesterday my human and the FG went to the show again.  Nope- no ribbons again.
But the good news – he didn’t pee on anything he wasn’t supposed to.  We know his affinity for peeing on the deck and on the BBQ – so my human watches him like a hawk while he is indoors at the show site.  Outside, he employs his best overmarking skills.
In addition to monitoring peeing, my human also obsesses about poop before she takes him in the ring.  Yesterday when they were in the group ring, a Bouvier heard ( or felt) nature’s call – and had a big poop in the ring.  My human could sympathize with the embarrassed handler – recalling Einstein’s first trip to the group ring – where he also unceremoniously had a big poop.  She will never forget that moment…
Knowing when to take your dog out for a pee before going in the ring is also tricky – because who wants to show a dog to a judge who MAY have a wet leg.  Not all of us are careful pee-ers.  So it means getting us out and then cleaning us up before we go in the ring.  My human asked Connor’s human how THEY do it.  Connor, as you may recall is an Old English Sheepdog.  His owner just sighed and said “It’s not easy.”  No kidding.
Connor, by the way, got a Group 1 yesterday.  Go Big Fuzz. That’s my new nickname for him.
So no ribbons, but the good things yesterday : friends of my human came to see their first dog show and quite  enjoyed the circus; the FG made friends with a family who would have taken him home in an instant;  he did a nice job in the show ring; and he didn’t pee on anything indoors.  And he didn’t poop in the ring.  No big ribbon – but always look on the bright side!
Have a good one. Peace and paws up!
Seizure free days: 102