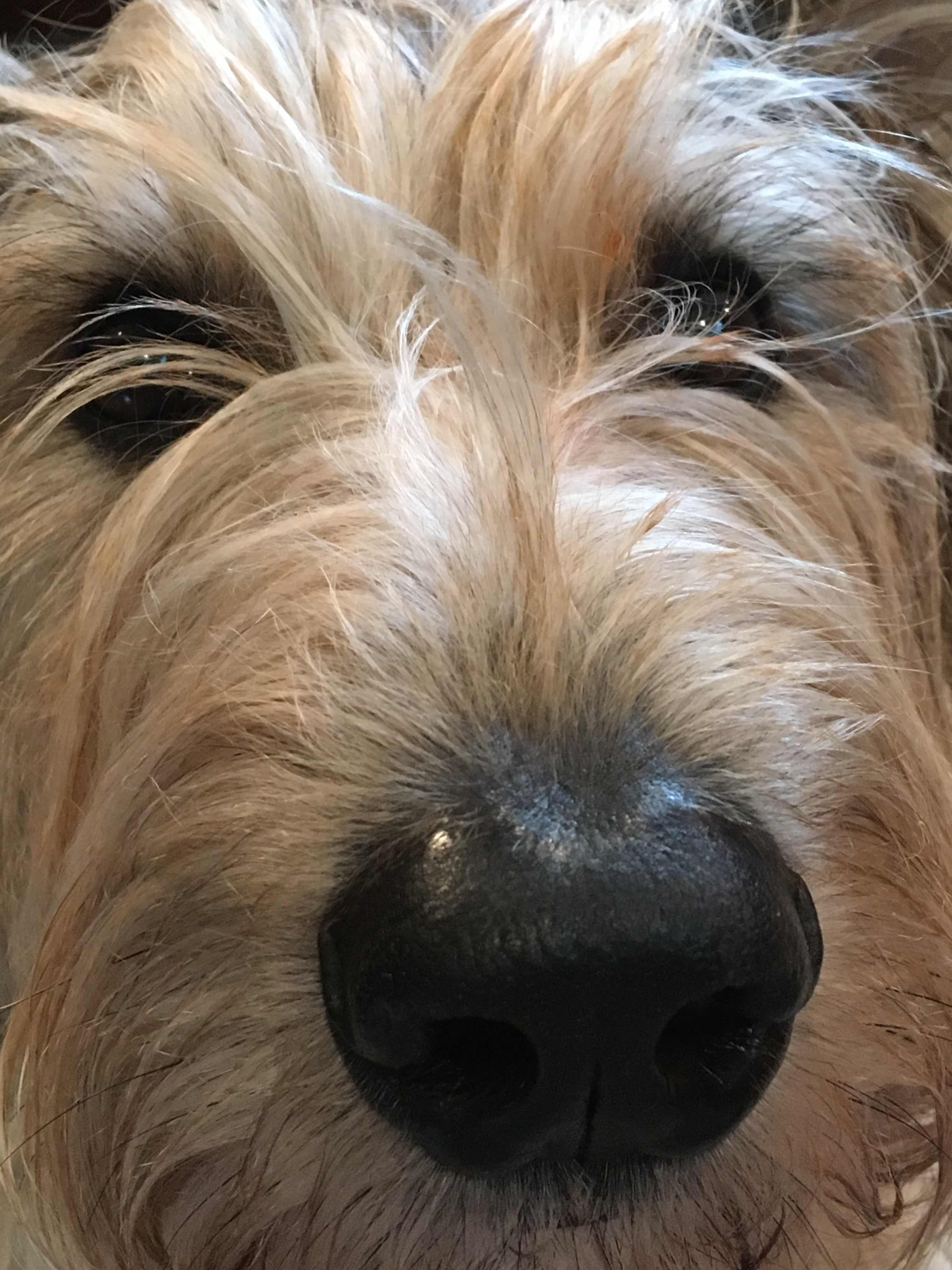 Well there was drama in the area.    The day before yesterday, my human got a message on Facebook asking her if she knew a dog who had been posted on the Lost Dog Network.  My human looked, and her heart sank.  It was Willow.   For those who don’t remember, Willow is a Picard who ran away a few months ago, just a week after she moved to Nova Scotia.  She got spooked by something – and was gone.  My human went on a couple of searches and even took Elroy one day.  Willow was safely found after being gone for 4 days.

My human has been meaning to get together with Willow and her owner and with the FG – but she was too busy with work and couldn’t arrange things.  She was just thinking about it this week – as she is still on vacation – and now would be a good time… But that was before she saw the posting…
The Lost Dog posting said Willow was lost at a Provincial Park not 8 minutes from our house.  So after I got my pills at 7:00, my human jumped in the car and went to join in the search.  She didn’t take any of us for one main reason.  The park is lovely – but dogs are supposed to be on leash.  But nobody does – they let their dogs run free.  And well, dogs running up to other dogs who ARE on leash can be iffy.  So she opted to leave us at home.  As she searched, she ran into Willow’s owner.  She was of course, distraught that Willow was missing, and on top of that, some “people” had contacted her and were being judgemental about the fact that this was the second time Willow was missing.  They thought she was an irresponsible owner.  What they DIDN’T know was that Willow’s owner had a busy time at work this week. And she couldn’t get home to take Willow out at noon – like she does all the time.  So – she hired a dog walker.  She wanted to be sure Willow was not bored and that she would get some exercise.  Seems pretty responsible to me.  BUT, unfortunately the walker had Willow dragging her line and something spooked her.  And she was gone…
They searched that night until dark.  Yesterday morning, after we instructed the furnace guy how to clean the furnace and after we had our walks, my human set out again to search.  She met up with a good friend, and they covered a fair bit of the park.  BUT the park is huge – and they realized she could be anywhere.  Just as they were heading to another trail, the phone rang and it was Willow’s owner.  She had been spotted in a residential area, outside the park.  All rushed to that area and walked and drove for several hours.  My human and her friend had to call a break in the late afternoon , because my human had an appointment at the Genius Bar at the Apple store. Not so genius if you ask me, if your phone battery only lasts 45 minutes.  Surely Apple can make better batteries.  But I digress.
Anyway, JUST as my human was walking in to become a genius, her phone rang.  Willow had been found – right where they had been earlier in the afternoon.  Fantastic news!!
So what are the lessons/questions from this experience?
1. Never jump to conclusions about how something happened.  Accidents happen – and Willow has a VERY caring and responsible owner.
2.  After this experience and after meeting several dog walkers in the park during the search, my human doesn’t think she would  hire one for walking us in a large multiple-dog walk.  Yeah, yeah.  I KNOW they know their dogs.  And I think that may have been part of the problem in this case – I don’t think the walker knew Willow all that well.
And although dog walkers are, most likely, smart people who love dogs, they can make a mistake.  Honestly, all it takes is ONE second off leash (or even dragging a leash), for a dog to take off.  I know most dogs stay with the pack, but some of us canines like to be individuals, and we don’t necessarily care where the pack goes.  I know Einstein and I wouldn’t care about a pack.  Maybe the whole group walk thing is better for certain breeds.  My human did note that a group she ran into was made up mostly of Labs, Goldens and a Boston Terrier thrown in as a protection dog.  At least HE thought he was.  I guess I have to read more about this whole pack and off-leash thing to have a better understanding- but for now, we’re not booking our group tour.  Besides, no one in their right mind would take us!  My HUMAN can’t even walk the three of us!
I would be curious to know more from readers whose dogs go on multiple dog walks – with a dog walker.  Are dogs trusted off leash or dragging a line?
Bottom line- Willow is safe and sound. So this scary story had a very happy ending!  Maybe she and the FG will get to meet after all!  In a fenced area….
Have a good one. Peace and paws up.
Seizure free days: 93