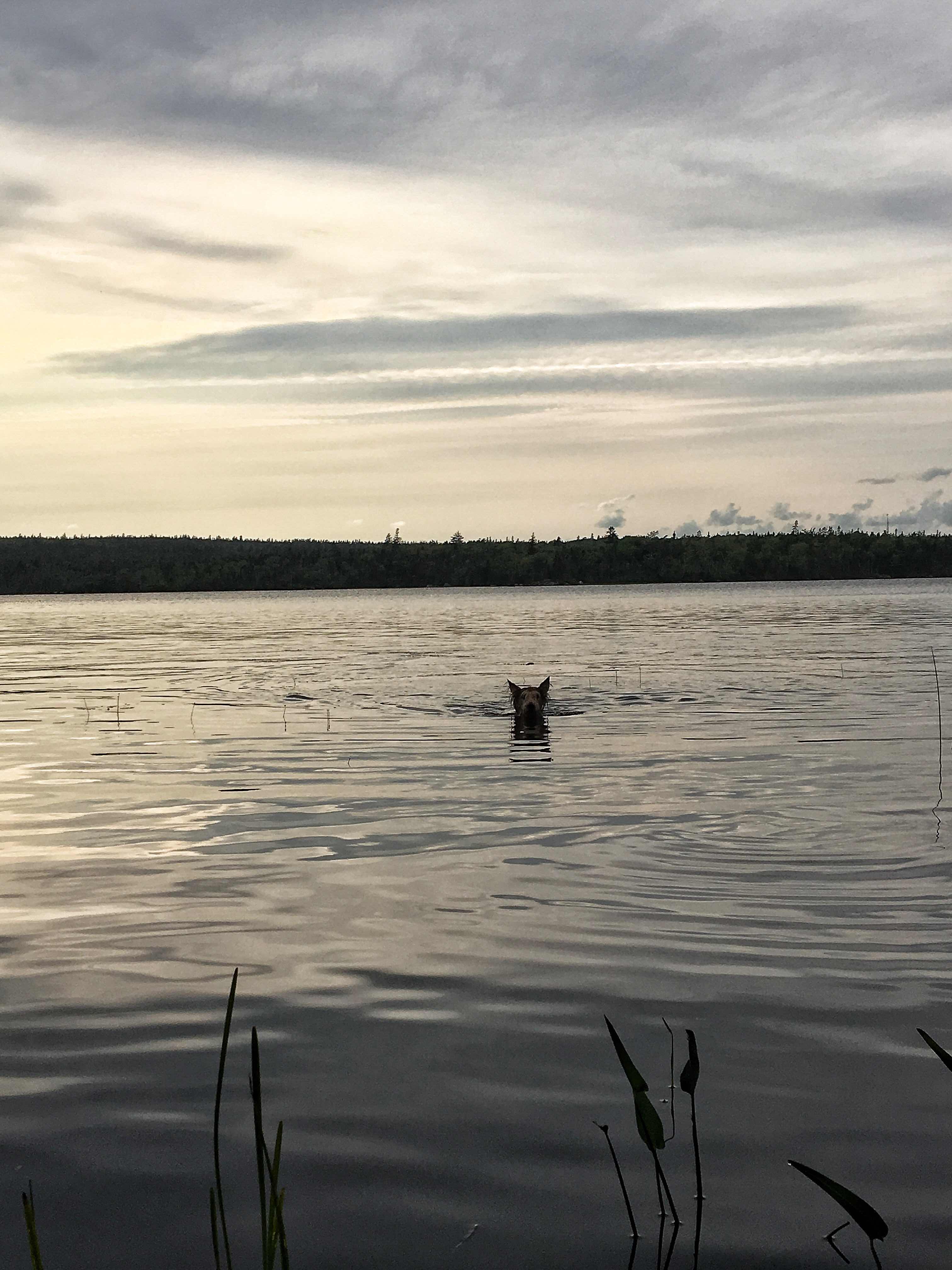 I’ve talked before about the fact that we PONs are not particularly fond of the water.  And then we have the FG who loves it.  In fact loves it so much. He started to scare my human.

Sunday night we were feeling pretty hot.  So after hanging out on the deck for a while, my human decided to take all of us on the trail to the lake.  She let us PONs run free and let the FG run free but on a long line.   He got down to the lake and in he went without giving it a second thought.  My human tossed him a stick which of course he refused to bring back.  Well he would start back with it and then drop it 3 feet from shore. She tossed a few more- with the same results.  Meanwhile the Polish Lowland grazing dogs were munching on grass and watching the entertainment.
Now usually the FG wades in the water and sometimes goes out to get a stick and has to swim.  So he doesn’t swim for long.  But the other night, something happened.  He started swimming.  Just to swim.  And the next thing my human knew, he was headed away from the shore.  Toward the wide open seas.  OK.  Not the seas.  But toward the middle of the lake.  Which is not close. So my human – who was wearing rubber boots, started calling him.  And he kept swimming.  Away.  So she got in the water with her rubber boots.  I’m not sure why she was even WEARING rubber boots and why she didn’t just take them off and wade in – but she was concentrating on the swimming Picard and wasn’t thinking straight.  Anyway, she called in her sweet, fake “Oh come here little puppy”voice and it worked.  Mr. Phelps-wannabe turned around and headed back to shore.  She cautiously approached him in the water – and grabbed his collar – because the not-so-helpful long line had sunk and was ho longer visible!  She breathed a sigh of relief and he just looked at her as if to say “seriously woman – can’t a guy just go for a swim.  It’s not like we have sharks in our lake.”
Meanwhile, the grazing PONs were suitably full – so we got to race back to the house, watching the wet Picard repeatedly stop to wipe his face in a tree trunk. He is a never ending source of amazement.
Well, I THINK my human is finished with work now until September.  Although she mumbled about some ethics reviews she forgot to do – so she MAY have to do a bit of work today. But at least she’ll be home.  Let the staycation begin!!!
Have a good one!  Peace and paws up.
Seizure free days: 70!!!!!