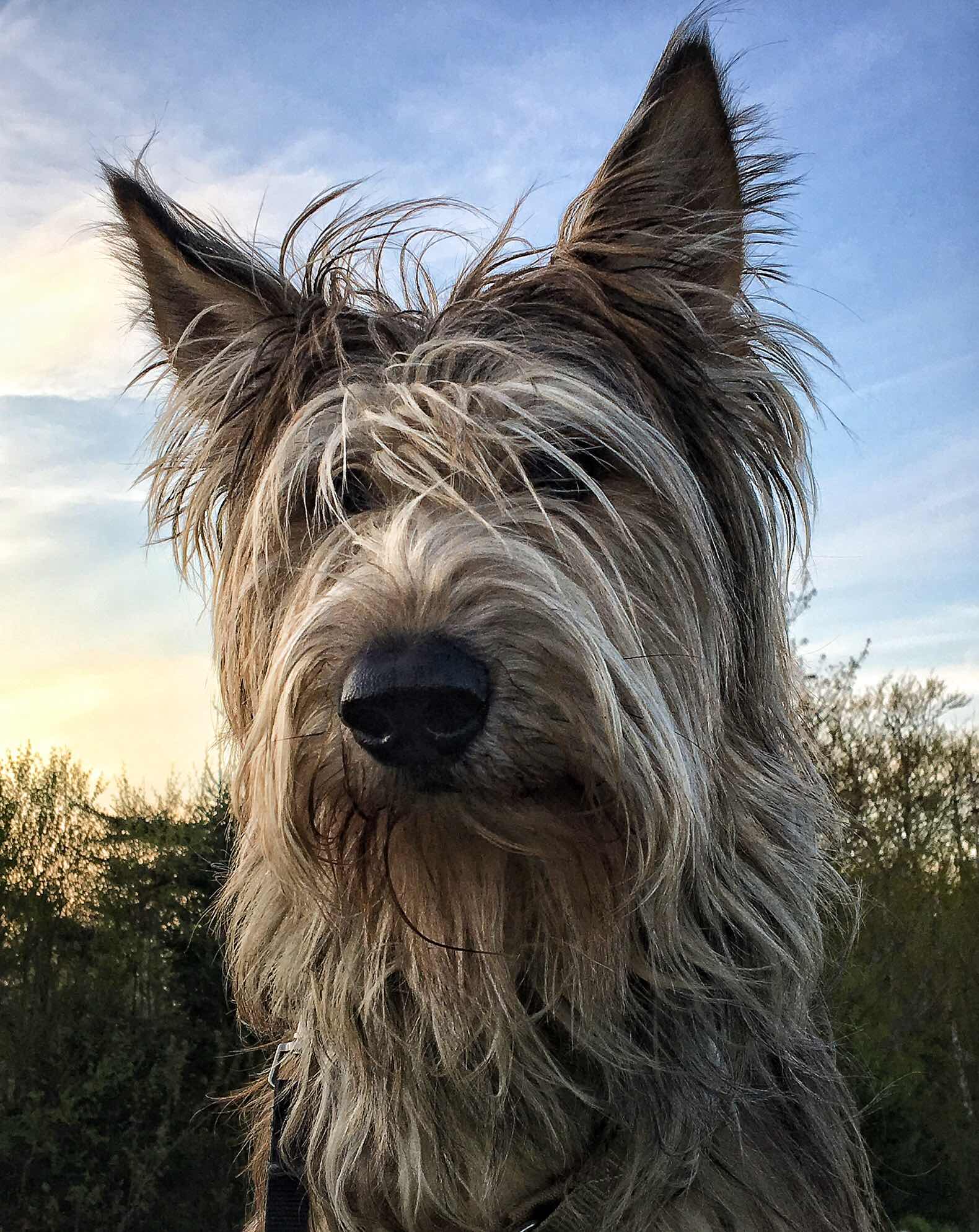 Yesterday morning we let my human sleep in.  Until 5:30. Then Einstein announced that it was a beautiful morning – so time to get moving.  We had walking to do. And she had what she hoped was the last of the deck sanding to do.

Einstein and I went first. We went for a good walk on the public trail and despite the fact that our feet were muddy, requiring a rinse in the tub when we got home, it was a good start to the day.  Then it was the FG’s turn.
Poor guy.  He didn’t make it to the road before he did his business.  That wasn’t the bad part. The bad part was the evidence of cling ons.  That doesn’t usually happen to the FG – but it appears that munching on PON hair does not always result in “normal” stool.  So my human had an idea.  Take him down to the lake.  It’s called the cheater’s bath.
So down they headed – with a floating fetch toy in hand. Now the FG hasn’t been for a swim since last summer.  So my human wondered how this would go.  She tossed the toy about 6 feet from the shoreline.  He just looked at her.  I should note that he was on a long line.  She encouraged him to get it.  He jumped around and tentatively put a paw in. A paw out. A paw in. And  finally all four paws were in.  The water is not deep at the shoreline.  It doesn’t get deep for about 15 feet.  He waded out, got the toy and raced back onto the shore.  Perfect!  Except he still had cling ons.  So they did it again.  And again.  And he was having a blast.  Until she threw the toy beyond the length of the leash.  At which point my human ended up in the lake. Sneakers and all.  Uh oh.  Anyway, they were having a great time – and he brought the toy back consistently.  And it was at that point that my human had what one would call a Brain Fart. She decided to let him off the leash.
You would think that she would know him by now.  Did she honestly think that he wouldn’t realize that he no longer had a leash attached?!  Sure enough.  She tossed the toy, he went out to get it, but this time, half way back, he dropped it in the water.  And she could see the Picard wheels turning.  He starting heading parallel to the shoreline.  She quickly shouted “get it” and pretended to run away from the water. He grabbed the toy, bounded out of the water and raced past her.  Let me tell you something. There is NOTHING in this world more wild than a two year old wet Picard.  He was OFF.  The only thing that saved my human from an hour of chasing was the fact that wet Picards MUST rub their faces in the nearest vertical surface.  So as he stopped to shove his face into a tree, she lunged and grabbed his collar.  Bingo.  Another lucky day.  Gotta get that lotto ticket.
They marched back to the house. One wild, wet panting Picard and a relieved human.  Despite the cheater’s bath, he still did require some concentrated bathing.  So he ended up in the tub after all.  He was partly dried and then released into the house.  Where he proceeded to wipe his damp face on the walls, the cupboards and the odd chair.  One less-than-charming Picard characteristic. Ya gotta love him.
Yes. A perfect start to a sunny summer day!
Have a good one! Peace and paws up.
Seizure free days: 33