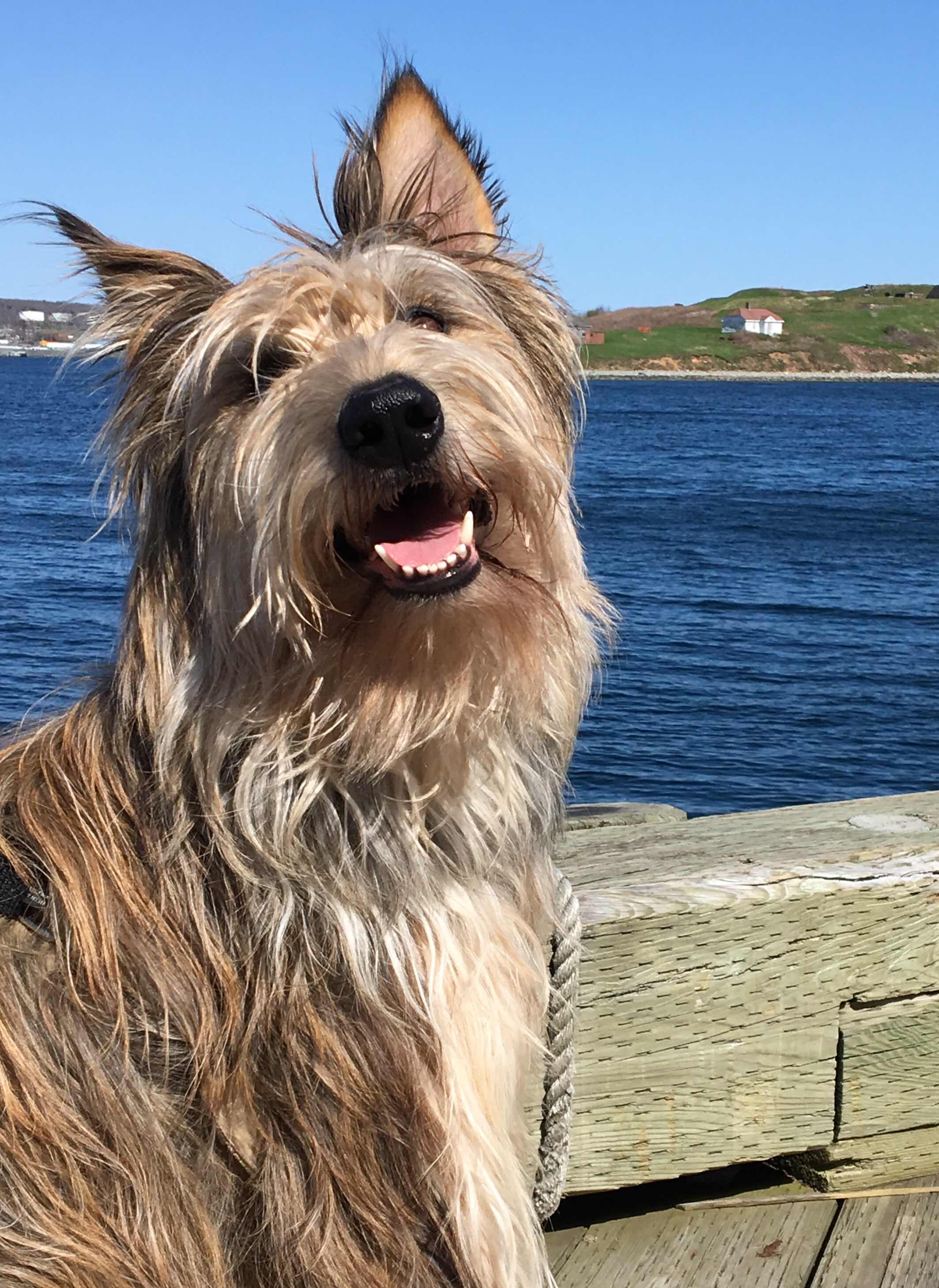 So yesterday we got up and Einstein and I were all excited- we got to go for a long walk with Pig Pen and his human.  Early in the walk, Pig Pen rolled in something- so I became OBSESSED with him.  I stuck to him like glue.  And I kept smelling his face because whatever he rolled in was delectable.

I felt a bit sorry for the FG.  He was missing the fun. But little did I know my human already had plans for the birthday boy…
FIRST he got to go to the pet store to pick up dog food and treats.  He waltzed in and immediately began to shmooze – with the staff and other customers.  Of course the “what is he” question was the first out.  My human did her best Berger Picard promotional speech -while  he licked anyone who cared to listen.  THEN he got to go down the TOY aisle where he selected this ball within a ball toy which also has a handle.  He carried it to the register.
After the stop at the dream store, my human picked up her sister and they took the FG down to the boardwalk on the harbor downtown.  It was PACKED with people walking, kids, dogs, people on bikes, scooters, buskers entertaining- the weather was perfect so everyone came out.  At one point a guy stopped and said “oh my gosh is that a Berger Picard?!”  My human was shocked because people rarely know what the FG is.  He asked if he could pet him – and said he had read all about the breed and would like to get one some day. Well apparently the FG was the PERFECT ambassador- giving kisses and hugs and before my human knew it there must have been 6 people standing around looking at him. He lapped up the limelight.
They walked for several km. and he was the perfect dog. Except for one little “almost incident “ when it was crowded and my human thought the FG tried to goose a man from behind.  She pretended she didn’t see it.
They came home and the FG conked right out.  Einstein and I were a BIT jealous, but mind you, we DID get our long walk in the morning- and it WAS the FG’s birthday.  Now I’m counting down the days until mine.  In October. Gotta plan ahead. I like the Pet Store part and we can skip the waterfront part.  Just take me to another pet store.  Where there are free samples.  Lots of them…
Have a good one!  Peace and paws up!
Seizure-free days: 12