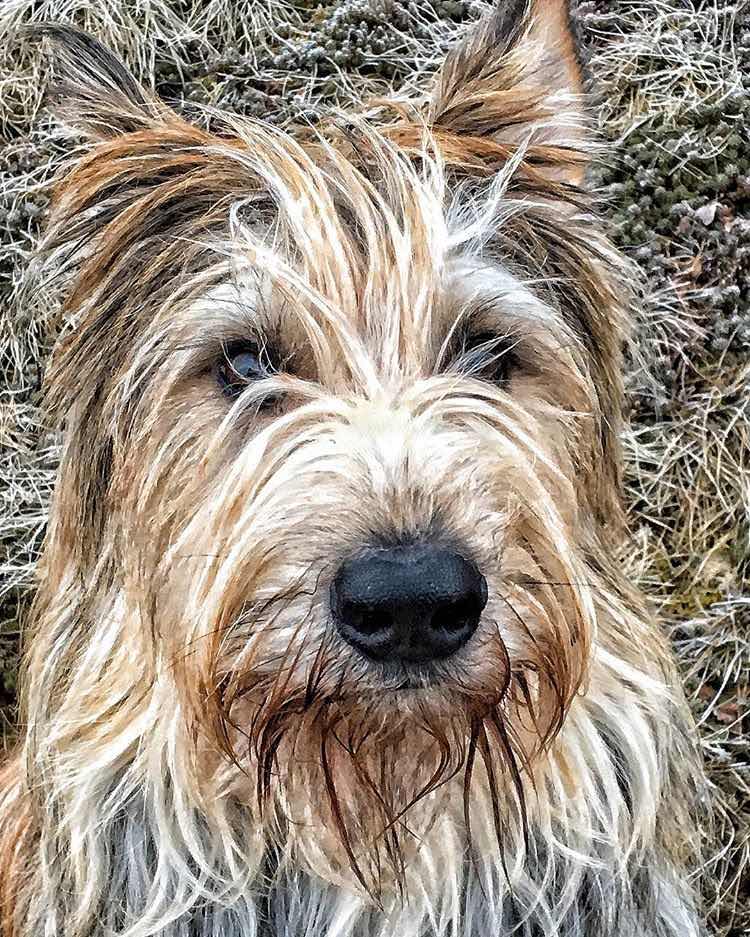 Sometimes things happened in your enviroment so slowly, that you don’t notice them at first.  Like the olfactory art on the windows.  You wipe the windows, and then all of a sudden, you realize they are like frosted glass again, and you’re not even sure when they got so bad.

The same thing is true with chewing.

So we remember that in June of last year, my human could no longer face the sight of the dining room carpet.  The FG had made a series of holes in the carpet and what started as one tiny thumb print sized hole became like a swiss cheese rug.  So she bought a new carpet and for the first several months watched the FG like a hawk for any signs of nibbling. He DID start in one spot, but then seemed to lose interest.

But somehow,  perhaps while my human’s mind has been otherwise occupied, she didn’t NOTICE the fact that the corners on TWO ends are now no longer sharp.  They are rather rounded.  And she had actually caught him on a couple of occasions, beginning to also add his swiss cheese pattern. If you SHOULD catch him mid-act and shout “hey – stop that” he just looks at you.

My human just says he is lucky he is cute.   I swear he is THE most bold and daring dog I have ever met.  Besides his interior decorating skills, he CONTINUALLY plays poke-a-PON with Einstein – whenever we are getting ready to eat.  It’s like he KNOWS Einstein is concentrating on food, so he takes his chances and pokes him in the butt.  Einstein whips around and lets out a warning bark, but Mr. Persistent does it again.   After three of four pokes, before my human or Einstein can grab him, he LEAPS and races into the hall to get his food.  And when he makes a run for it, it’s like watching an gazelle doing agility.  Indoors.  My human closes the french door and can then put down Einstein’s food bowl.  This game is regularly scheduled during suppertime.  I should sell tickets.  He OCCASIONALLY tries it with me – but he knows my patience for shenanigans at meal time is even SHORTER than the FG’s.  So he doesn’t try as much with me…

It’s hard to believe that in May he will be two years old.  If we don’t sell him to a traveling circus before then.  JUST kidding.  Life would sure be boring without him!  And I must admit, I really DO  like him.  But don’t let him know…I wouldn’t want him to get too excited….

Have a good one. Peace and paws up.
Seizure-free days:  6