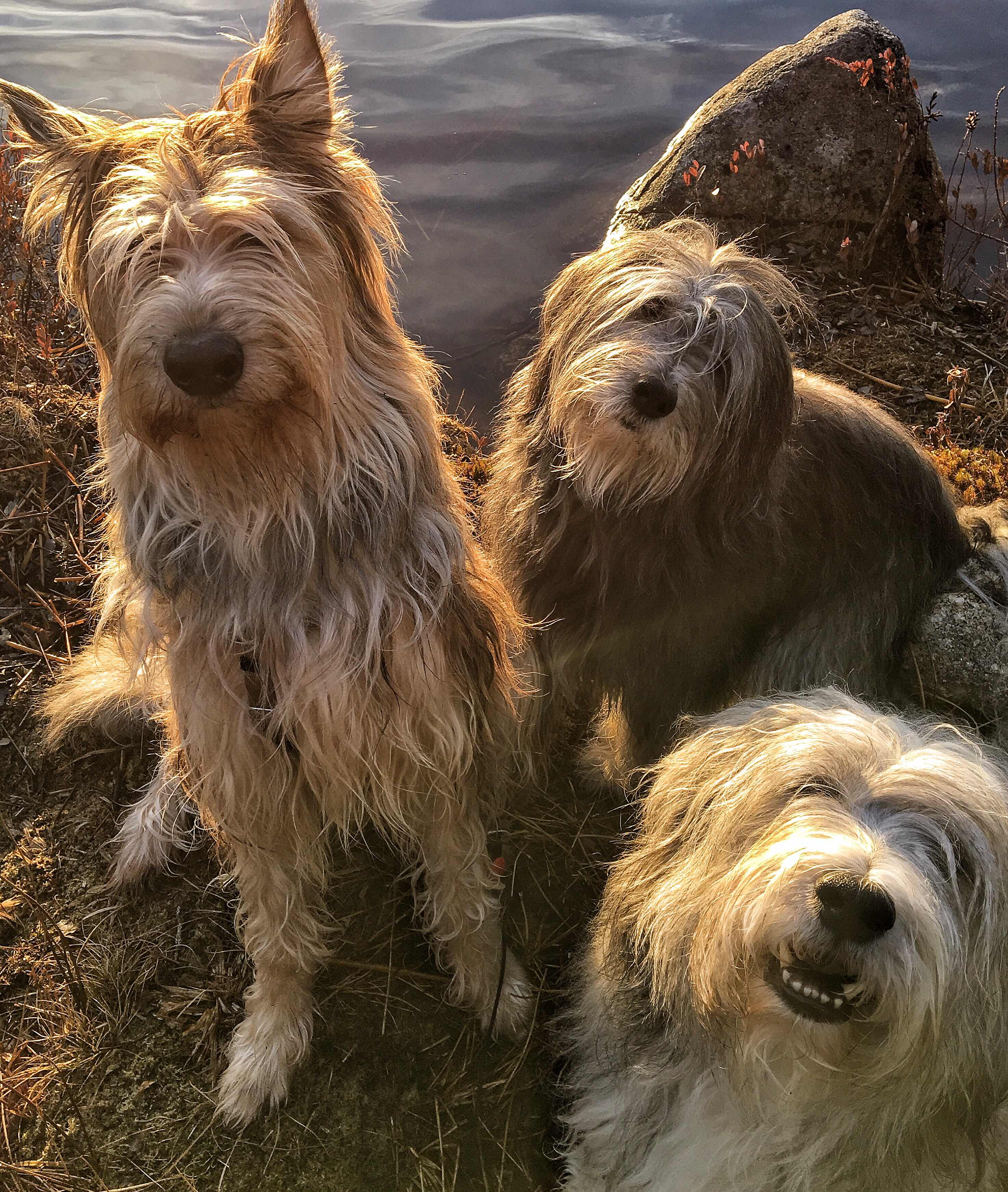 Today is April 9 and it is National Cherish an Antique Day.  A day for us to be really nice to our human.  Just kidding.  Although in dog years she is WELL over 100 years old.  Several hundred in fact. 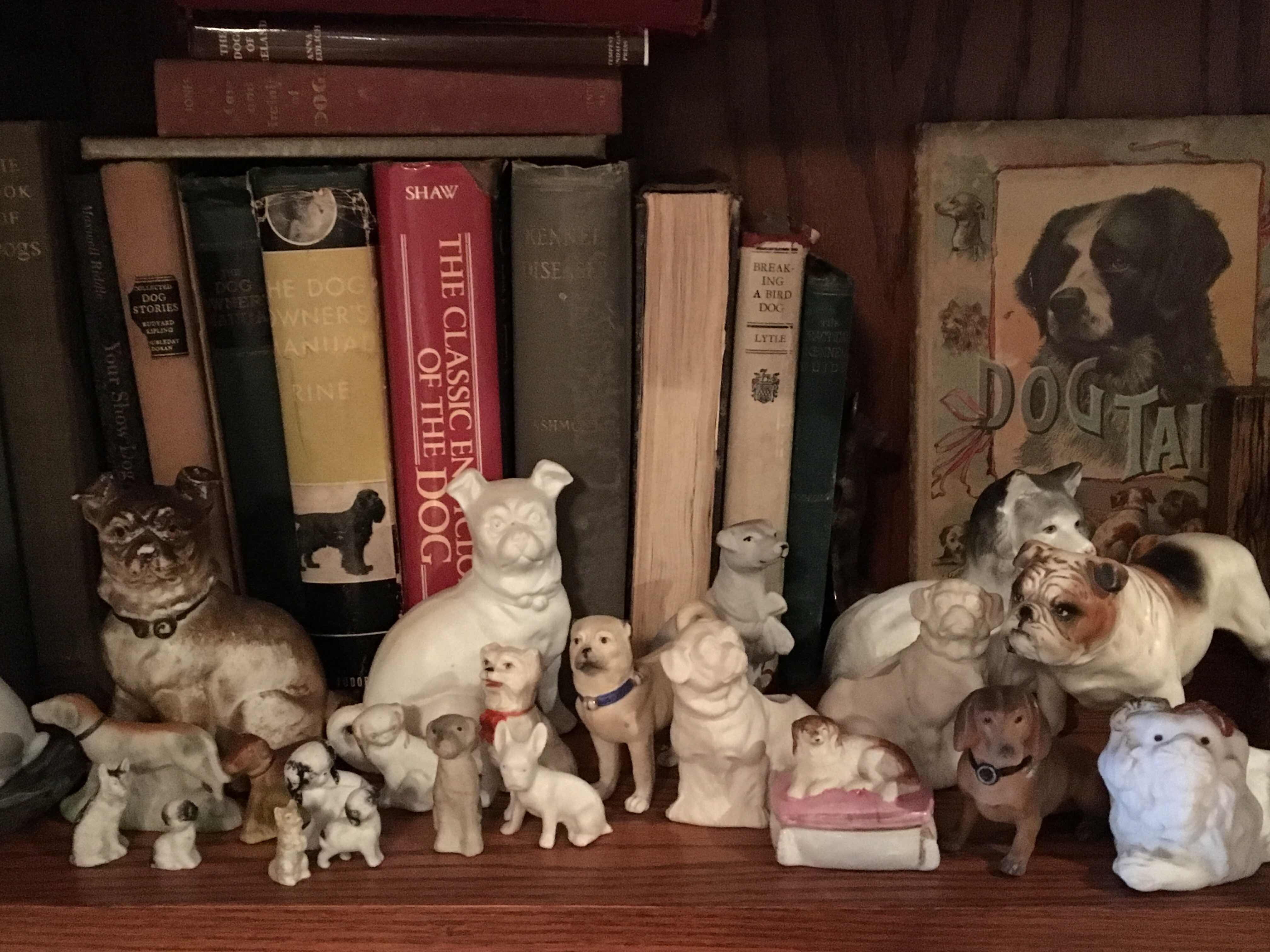 Although porcelain has been around for centuries,  bisque porcelain was used a lot in the late 1800’s for making everything from dolls to figurines. It’s white, unglazed porcelain, that is sometimes painted. If you Google antique bisque dogs, you’ll see all kinds on EBay and Etsy.  Many of these dogs have no markings – so you can’t be sure where they were made.  But sometimes, if you look very closely, you may find the country of origin.  As a general rule, before 1890, items imported into North America did not need to be labelled with a country of origin.  And if you see the words “made in” you will know that the item was made after 1914.  Now these are GENERAL rules, but they may tell us a little bit about how old our bisque dog MIGHT be.

This tiny french bulldog is only 2 inches tall, but if you look closely on his back side, you will see the word Germany. 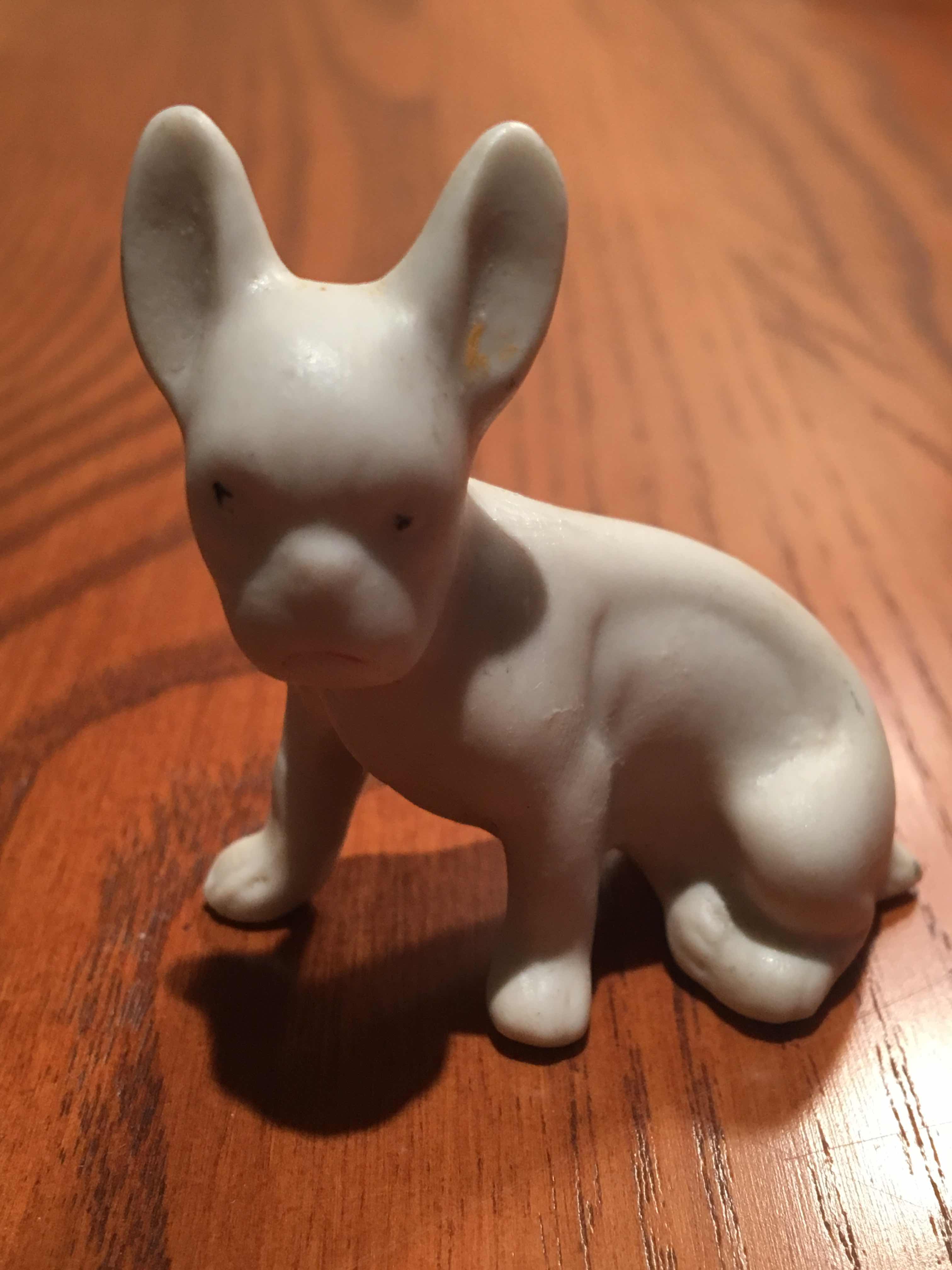 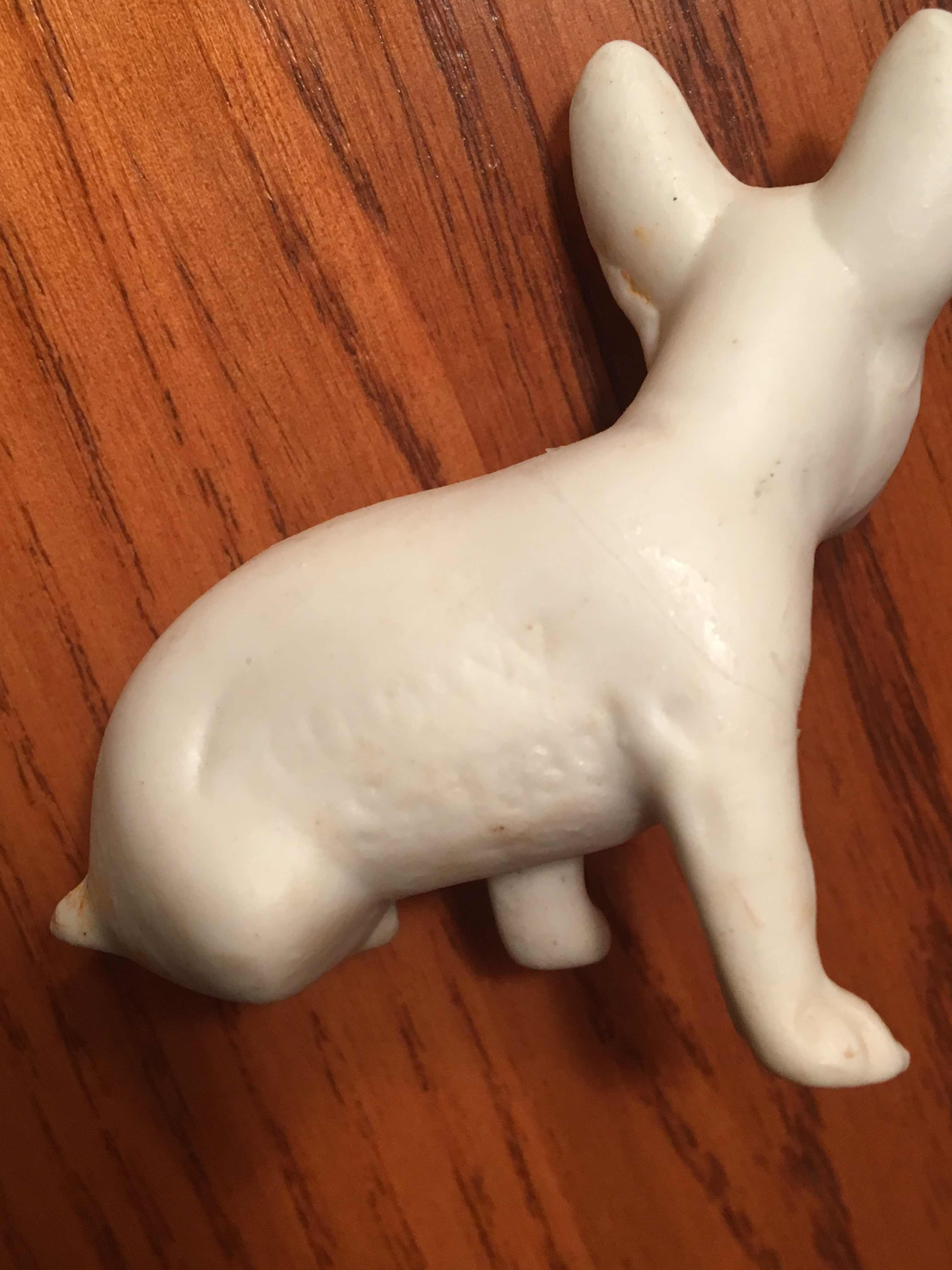 Same thing for THIS little guy who is only ONE inch tall. 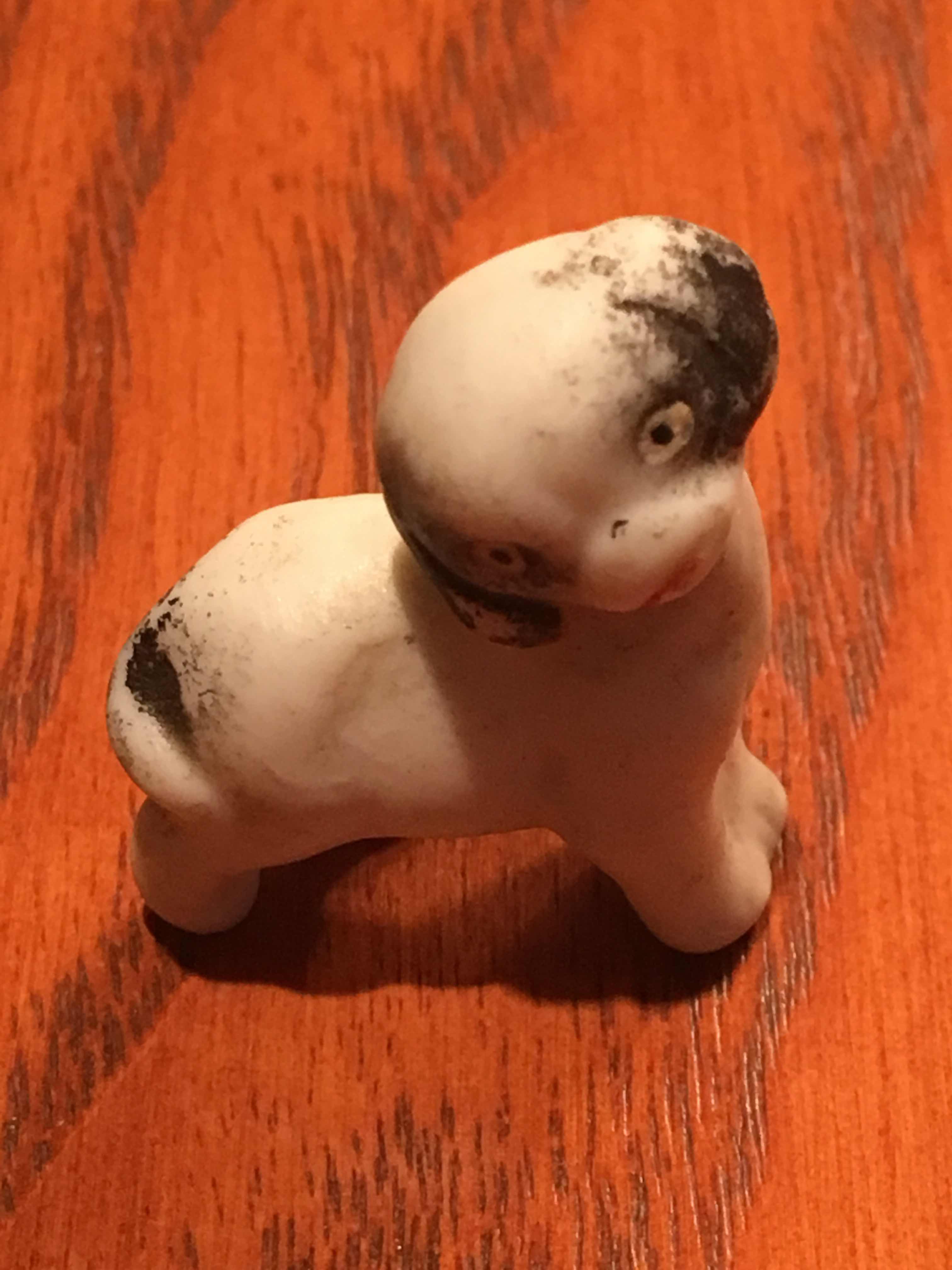 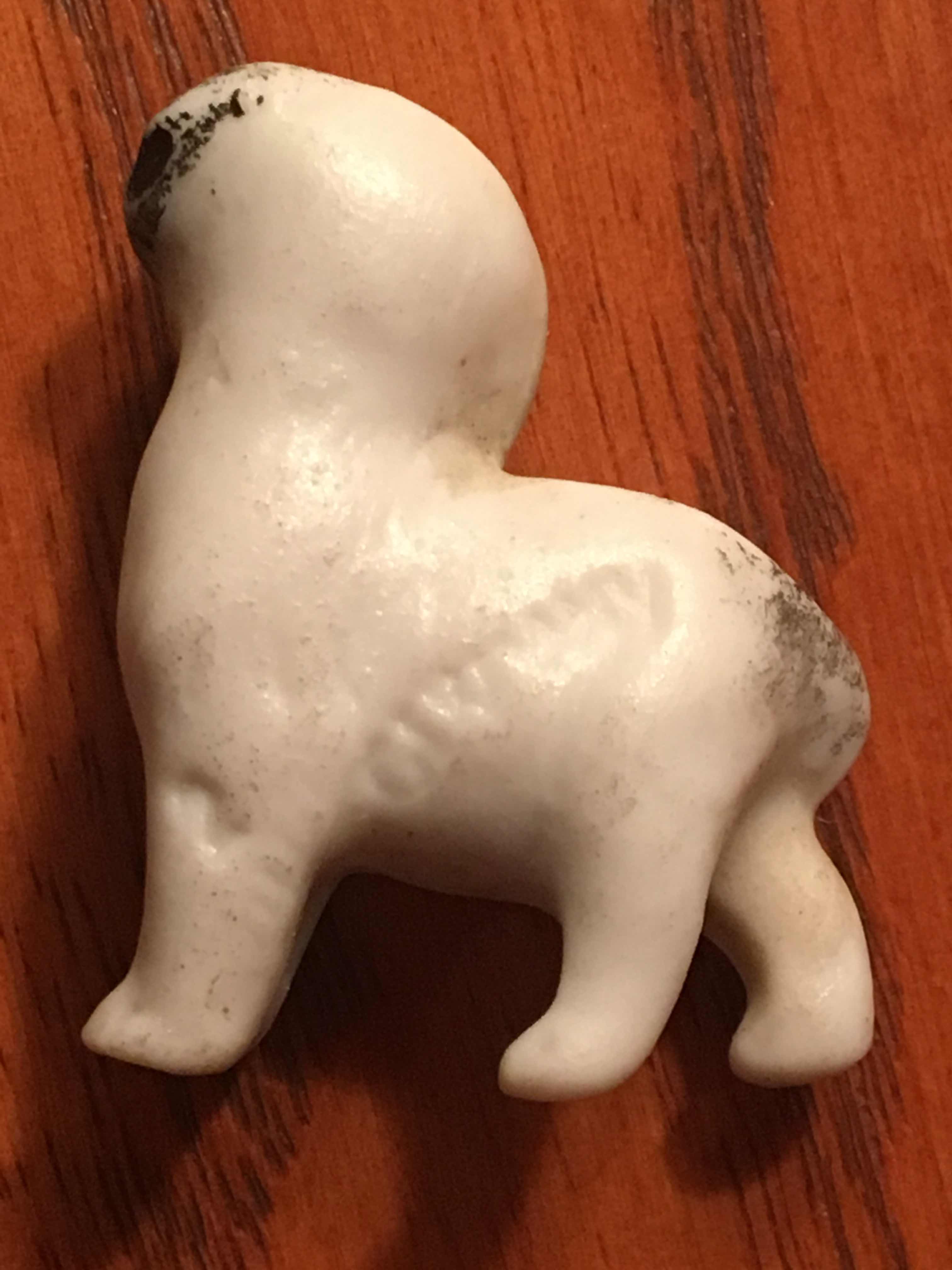 Given that they have a country of origin, it is likely they were made somewhere between 1890-1914.
This guy only has a number 1880.  That COULD be the date, or it could be a manufacturing number.  Still, he’s probably at least 100 as well. 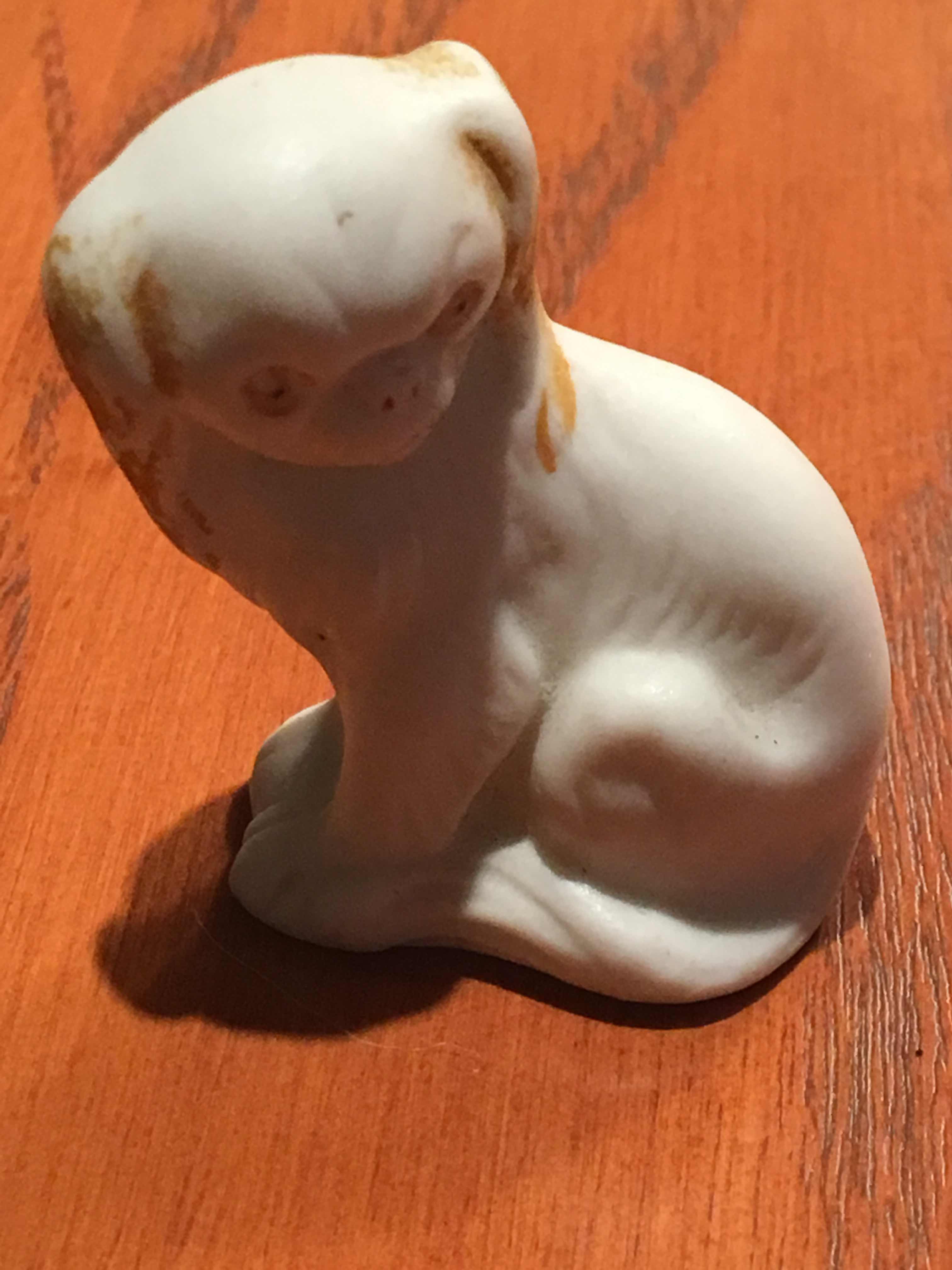 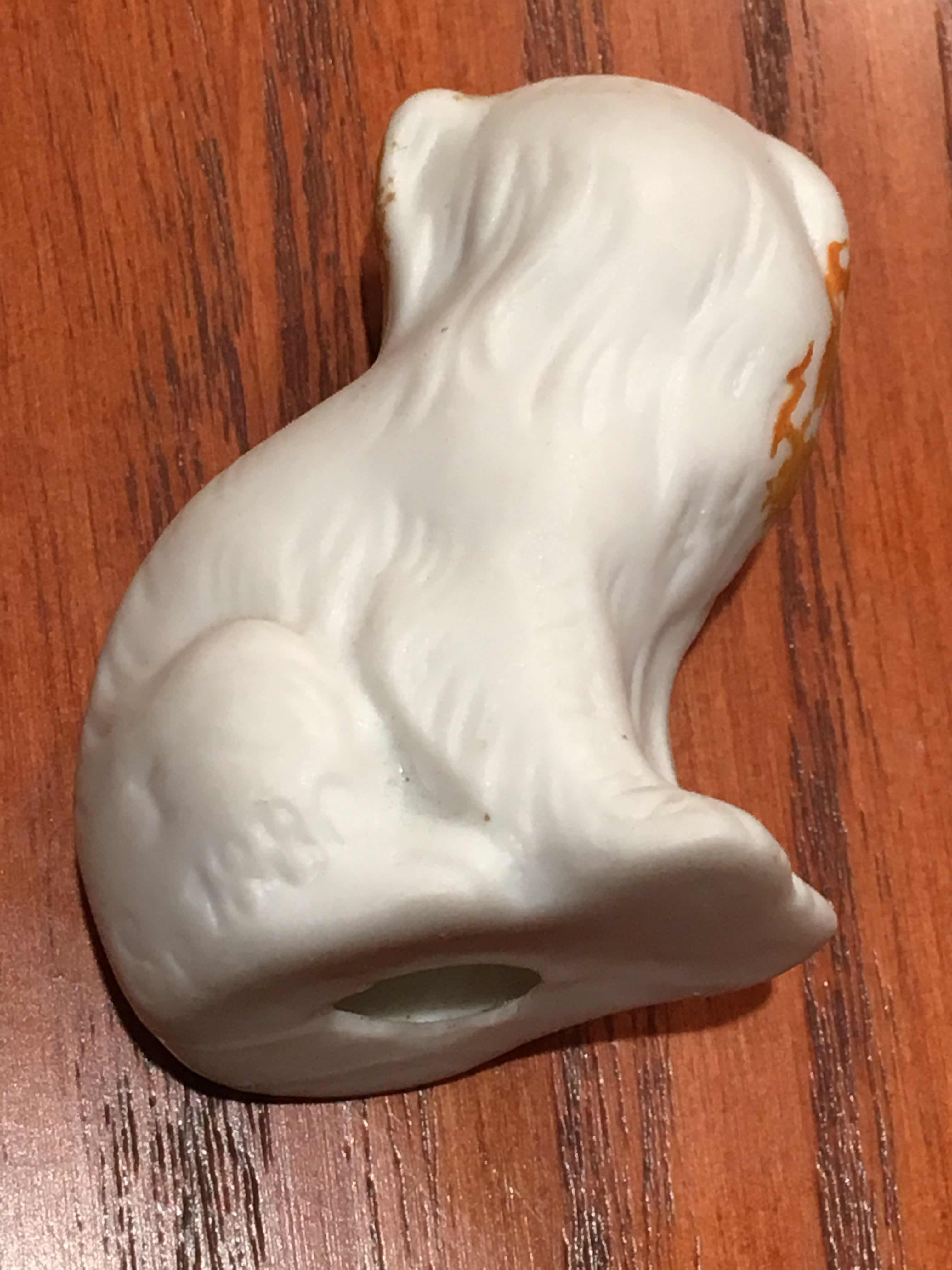 Most of her canines have NO markings. 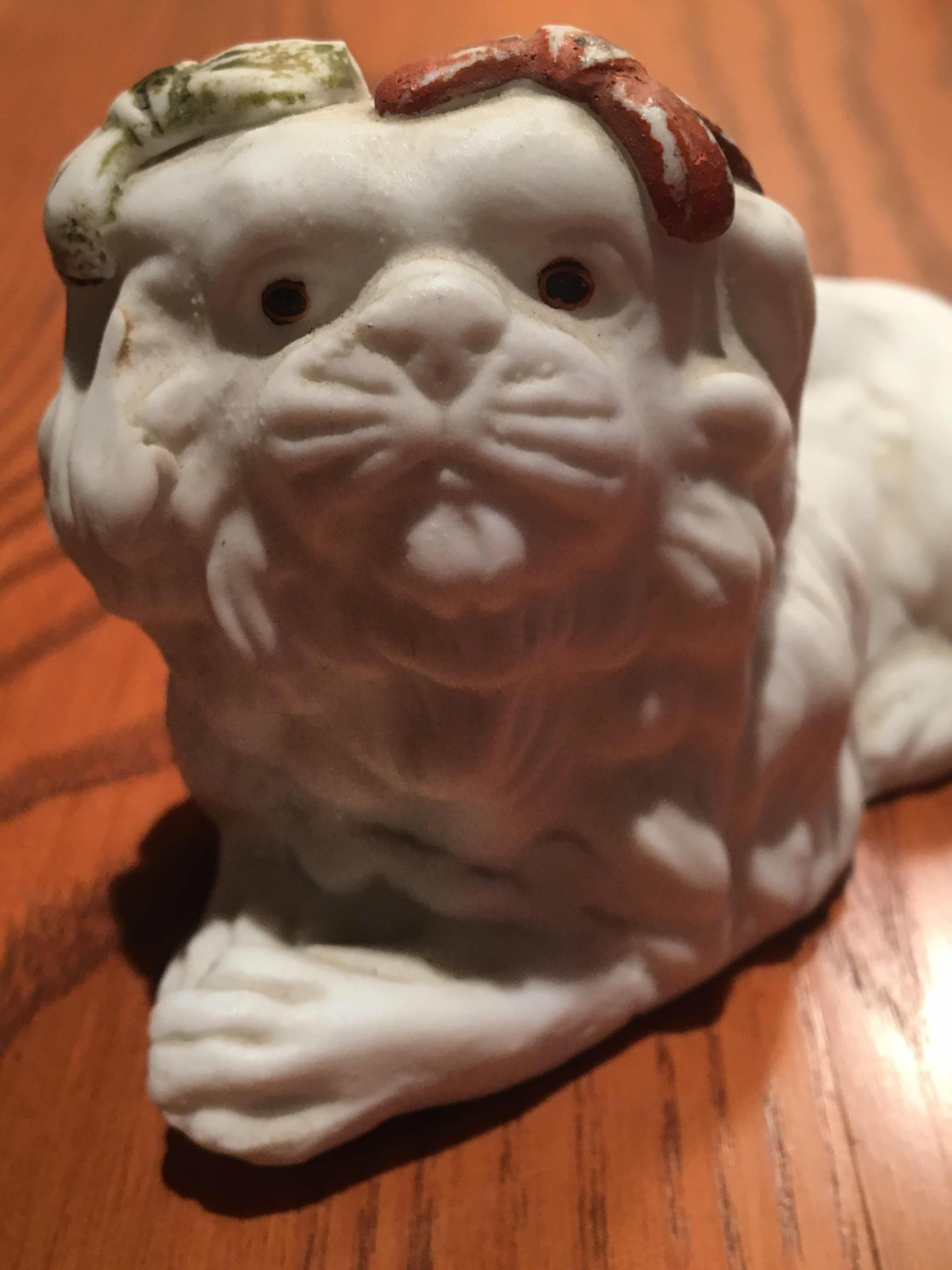 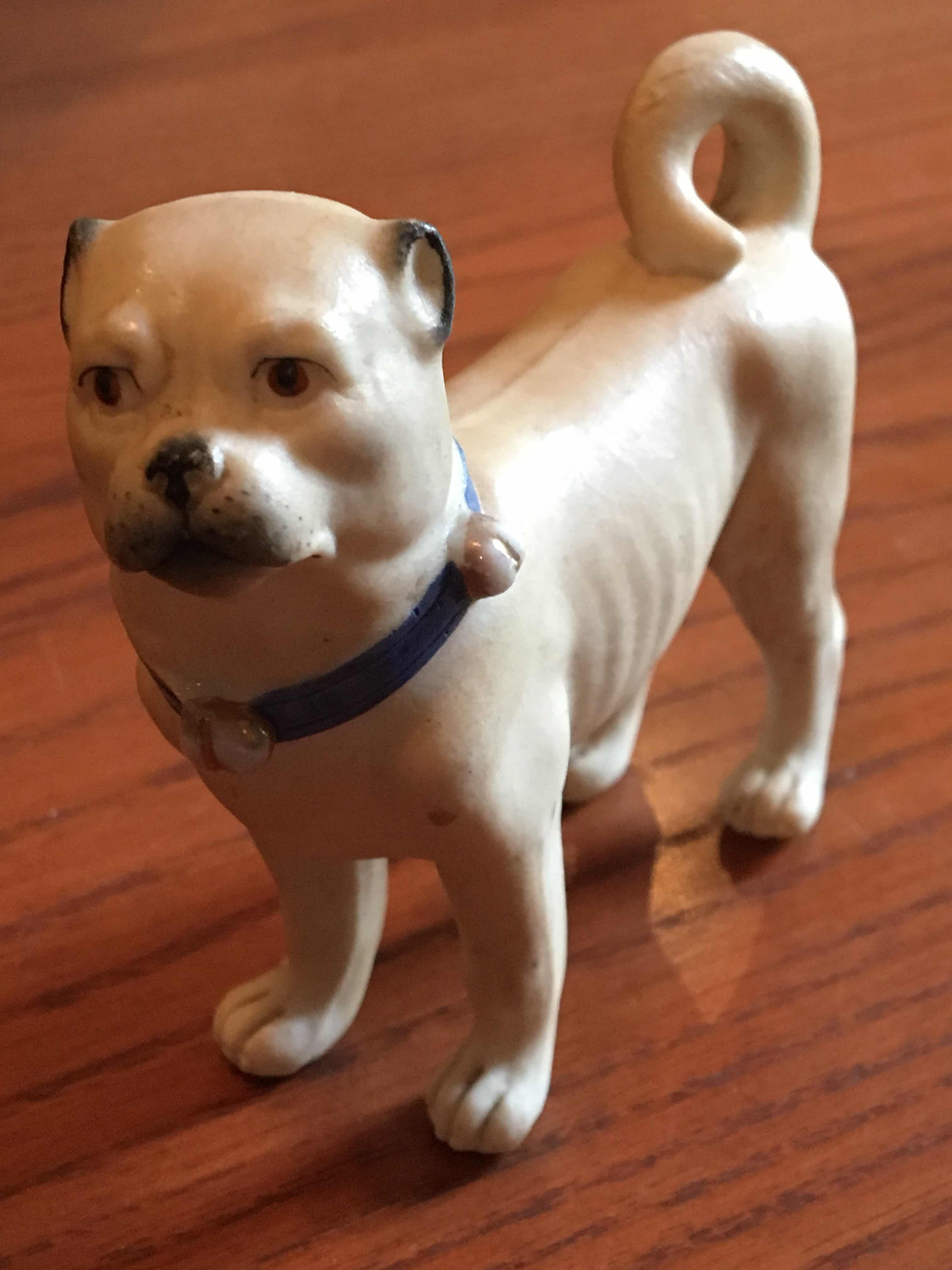 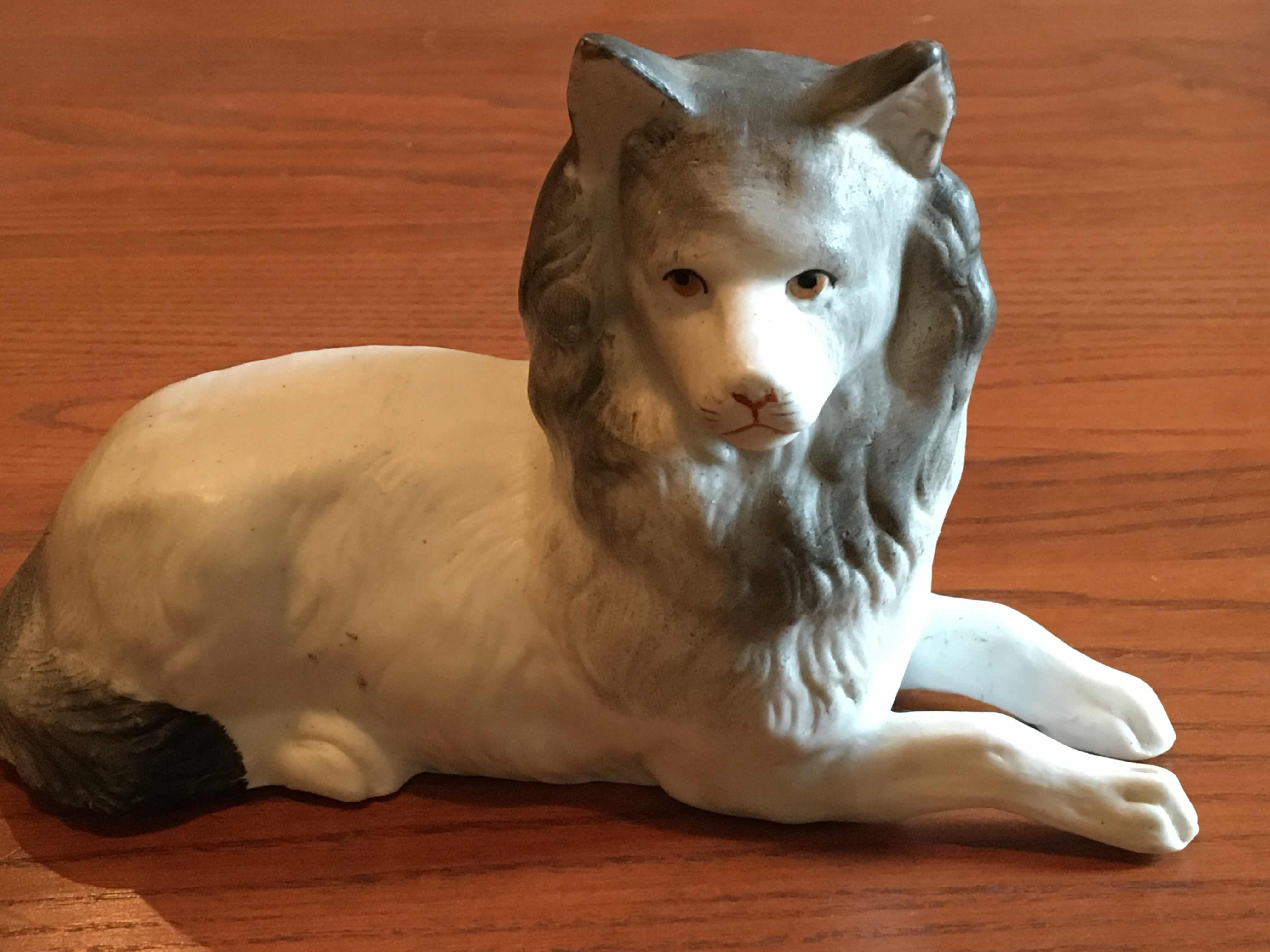 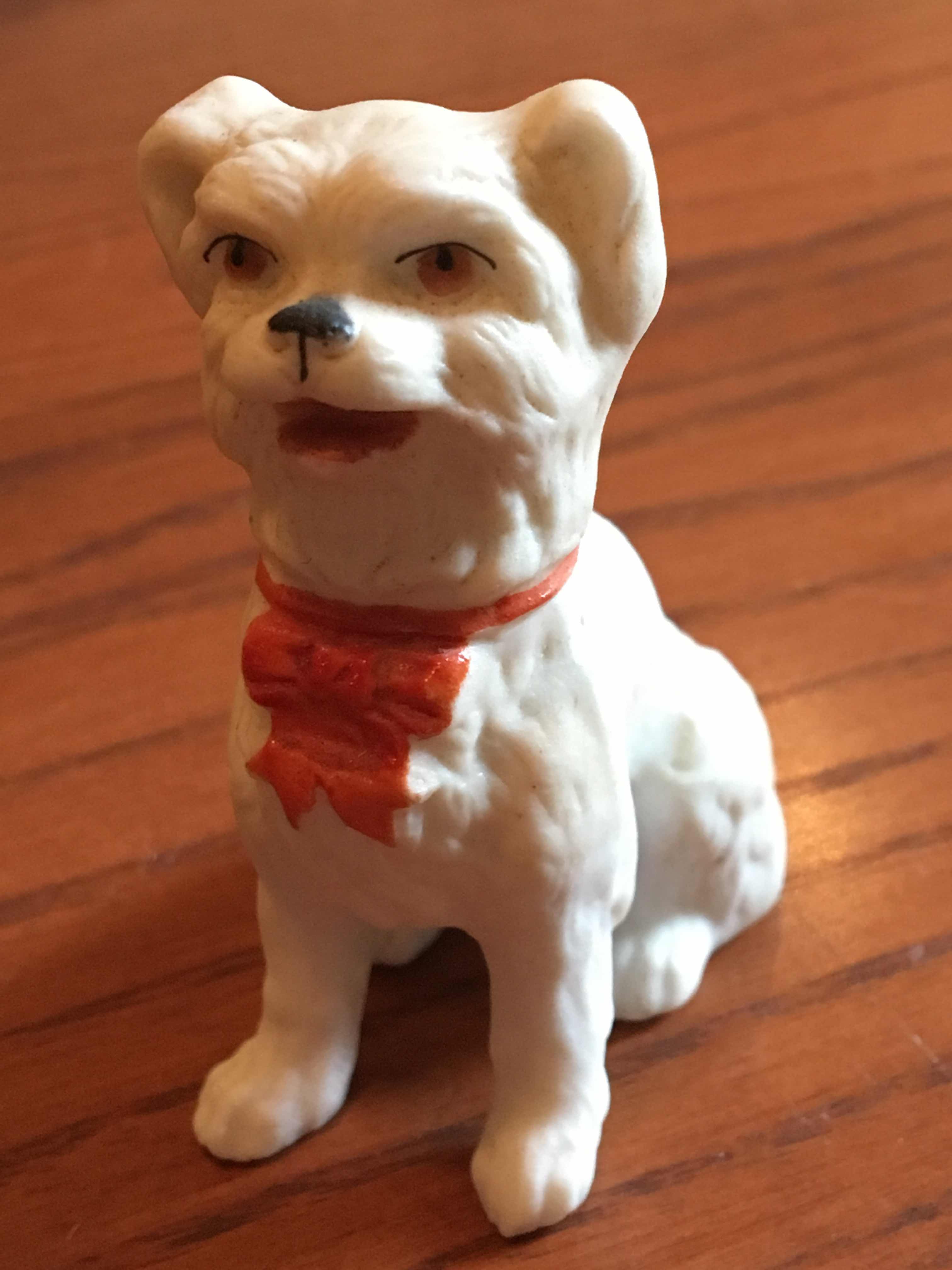 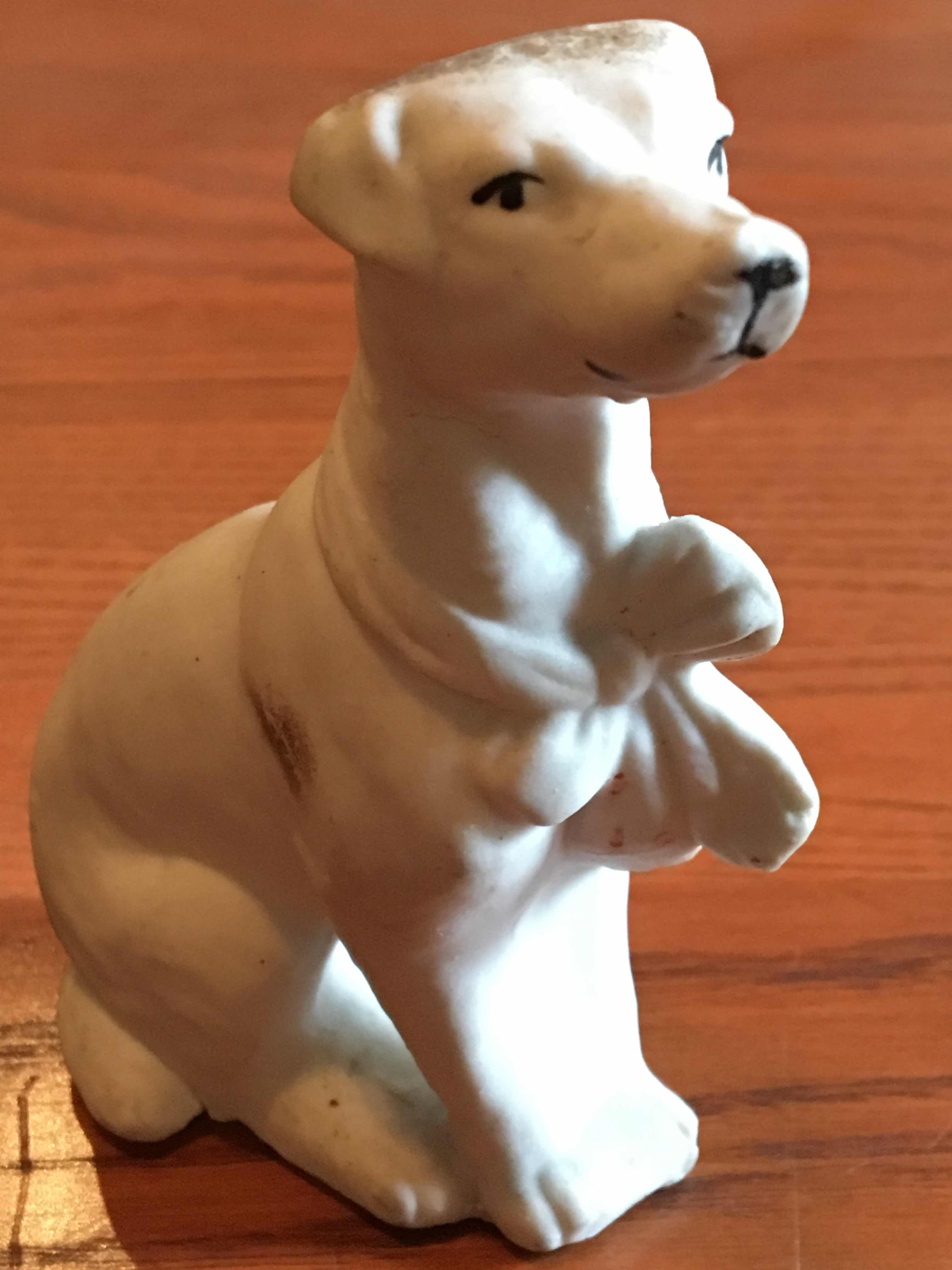 That could mean they are older than 1890…or maybe they had an ink marking or label and it came off.  Ya never know – although the more you handle the old stuff, the better idea you get at knowing whether something was made in 1890 – or in 1990.  Still – even the experts can be fooled!

My human was surprised to see some of the prices on old bisque dogs.  Trust me – she didn’t pay those kinds of prices.  She purchased her little canines mostly at yard sales and flea markets and the odd antique show.  She never paid more than a few bucks for her Fidos – and I dare say, you still CAN find these vintage canines at flea markets if you look carefully for them.  And if you are paying just a few dollars – then you won’t be TOO concerned if what you THOUGHT was old turns out to be not so ancient.  The bottom line – you have to like your purchase!

We still haven’t found a bisque PON or Picard.  But that doesn’t mean she won’t keep looking!  It’s kind of neat to wonder where these guys were before they came to our house.  If they could only talk and tell us where they have been.  I’m just glad we don’t have to feed them!

Have a good one.  Peace and paws up!
Seizure-free days: 3