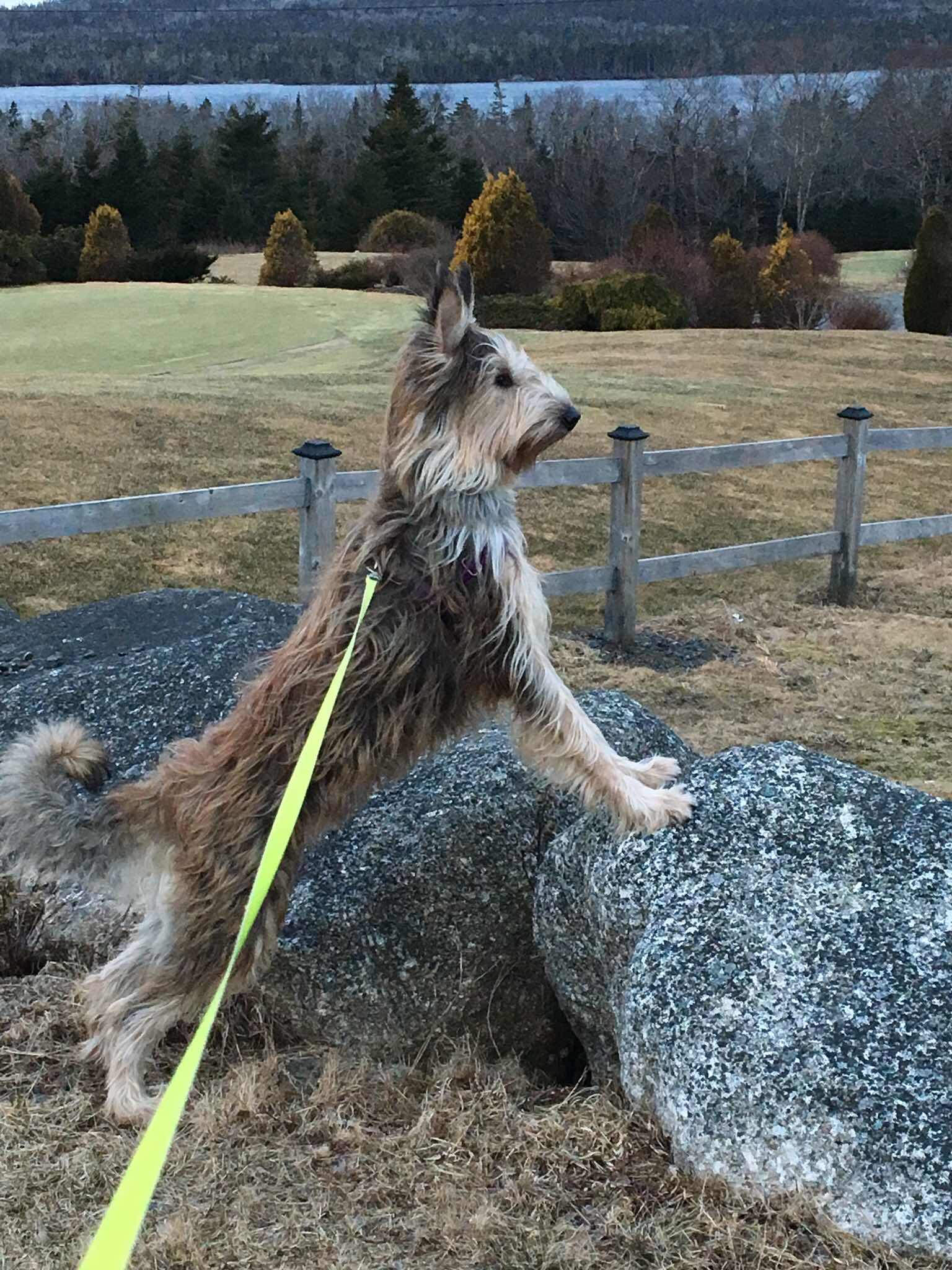 I want to know more about the behavior of Picards.  So I’ve been doing some reading.  And from what I can tell, Picards are general all-purpose farm dogs who not only moved flocks, but they also patrolled the perimeter of fields while flocks grazed – to keep an eye out for predators.  And that patrol work is something that my human has really started to notice with the FG.  I mean he also chases leaves with a great deal of zest and commitment, but his “observational behavior” is also very interesting.

The last week or so my human has been taking him up to the golf course at the end of our road for his morning walk.  And when he’s not jumping around like a frog on hot pavement when the wind blows, he’s listening.  Every now and then he just stops.  And listens.  But the funny part is the near the end of the walk.  As they are getting closer to home, they approach  the parking lot of the course.  And there is a large wall of boulders around part of the lot, where he walks.  So the first day, he went over and stood with two feet on a boulder, surveying the lot and the course in the distance.  And he just STOOD there.  Keep in mind that this is early in the morning, and  there are actually not many golfers at this time of the year.  So my human snapped the photo of him, and waited for what seemed like minutes until he was ready to move.  The next day, he pulled her to go and do it again.  And he stood and surveyed.  And the next day.  And the next.  And no – she is NOT enticing him to do this.   She actually has to coax him some mornings to move along.

I wonder if this is part of his herding/guarding instinct.  And it’s funny – he has started to attempt jumping up onto OTHER rocks in the last day or two as well.  He would do it the odd time before – but lately he is enjoying his eagle-eye view a LOT.  My human has to watch him – because he likes to leap OFF those boulders too if she doesn’t grab him.  The Flying Picard.  That’s all we need…

Anyway, we are having snow today.  So it looks like our walks may be a bit shorter.  The reason we are having snow is because my human was bragging about what a GREAT winter we have had.  So it’s HER fault!  But the good news is – the end of winter isn’t THAT far away. Maybe instead of boulder jumping today, I can get that Picard to jump up on the counter where the treat jar is.  Gotta keep him busy…

Have a good one.
Peace and paws up!