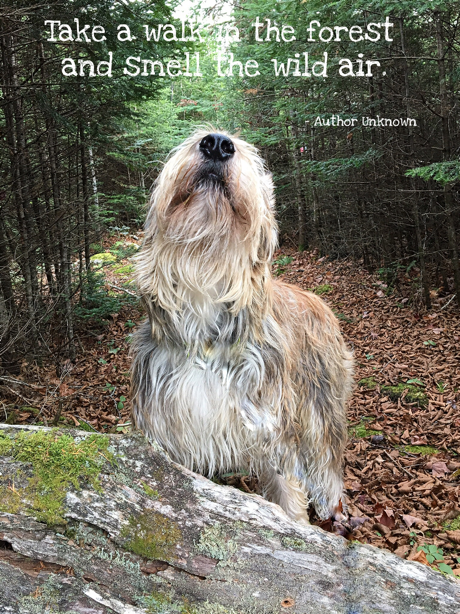 When my human gets up each morning, she looks at the weather app on her phone.   She checks the temperature so she can decide how many layers she needs to wear while on our morning constitutionals.  Whether she can go light weight or whether she needs to dress like the Michelin man.  If you don’t know who he is,  Google him for the image.

But she has now realized that finding out the temperature is not enough.  Probably more importantly, she needs to check the wind.

It’s probably no coincidence that you change one letter in the word “wind” to find an equivalent term.  At least when it comes to Picards.  Because wind equals WILD.  There is something about a windy day that turns an already crazy Picard into a totally uncontrollable beast.

My human took the FG out yesterday and decided to take him for a good walk on the golf course.  We have no snow, the trails are solid but not icy – it was a perfect morning for a walk.  BUT, it was windy.  And holy moly, within 5 mnutes of going out the door, she had one totally loco Picard.  I mean more than the average loco.  He was jumping.  Spinning.  Trying desperately to chew through the leash.  Tugging on it.  Pulling it.  Twirling around my human.  Growling. Bouncing.  Every time the crazy behavior started, she had to stop and stand still.  Because attempting to get the leash OUT of his clamped jaws simply eggs him on. I REALLY wish someone could get a video of the twister dog and the exasperated human.  She stands still.  He stops.  And he throws his head back in the wind taking in all the scents.  She takes one step.  ON he goes again.  She tries to trick him by saying “What’s that?”  Or “Watch.”  Which works the first time and then it’s back to wind tunnel whirl wind.

Eventually – as they are nearing home, he will walk – and suddenly stop RIGHT in front of her.  I think it’s a ploy to stop her from taking him home.

By the time they got home, she was exhausted – but she still needed to take me and Einstein out.  And she and I were engaging in what she refers to as the Polish Poop Wars.  It will no doubt be referenced in some history books some day.  You see, since the weekend, I am STILL annoyed about the whole dog show thing.  And not being able to go.  So I am staging my own form of protest.  I refuse to poop.  Seriously.  Reading this, you may THINK I don’t NEED to poop – but let’s face it, you poopologist dog owners KNOW our daily bowel routine.  It’s an addiction for many of you.   And my human is a professional poopologist.  It all started the night before, when, in an effort to NOT be woken  at 3 AM, my human decided she would take me for a long walk before bedtime.  She figured if she did that,  there would be no need to wake her up in the night.    And she knew I needed to poop.  Well.  No word of a lie.  We walked for over 3km.  She tracked it on her phone.  She begged me to “Hurry up.”  Probably around 487 times.  But who’s counting?  Anyway, I didn’t go so she had to concede defeat.  The good news was, I didn’t get up in the night because I was so tired after my walk.

So the next morning, after the twister walk, she took me and Einstein out – figuring I would poop quickly.  Nope.  This was the second battle in the Polish Poop War.  We walked for over 60 minutes.  Einstein pooped TWICE in that time.  Me?  I just kept trotting merrily along.  At this point, my human was getting really annoyed – because she DID need to go to work.  So we went home and she put Einstein in the house.  Then she took me on the trail to the lake.  And she stood there and we had a face off.  Two stubborn Poles staring at each other.  She looked at me and said, “last chance VIKTOR”.  With that emphasis on “Viktor” meaning I was really in the doghouse.  And she held a good card – she had not yet fed us breakfast.  So – no pooping meant I MIGHT not get my FULL portion.  Also, by this point, I REALLY,  REALLY DID need to poop.  So I caved.  At which point you would have thought she won the Set for Life Lottery.  She told me how brilliant I was and hauled fistfuls of kibble out of her pockets to reward me. Humans.  She may have won THIS battle – but trust me – the War is not over….