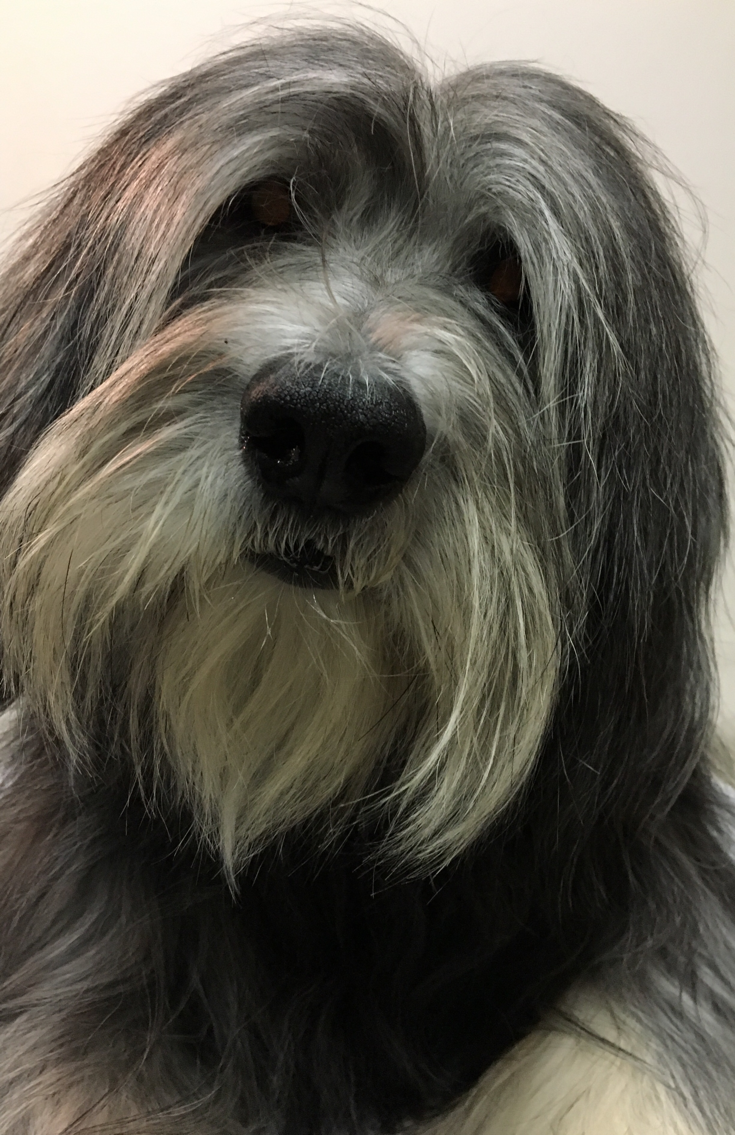 Yesterday my human had the day off.  So of course, we wanted to make the most of it.  By getting her up early.  Like at 3AM.  This has actually become a bit of a “thing” now.  I wander around at 3 AM, and she figures I need to pee because of my medication.  So I get to go out.  And then everyone gets to go out.  Then we get a treat and are told to go back to sleep.  And she sequesters herself back on the sofa in the DFZ.  Yup – she’s still sleeping there.  She realizes it’s about time she heads back to her bed – because we are all sleeping FINE together – with the FG out of his crate.  But I think she’s gotten used to sleeping on the sofa – and I THINK she is actually enjoying not having any of us sleeping on the bed and pushing her off.  But she has decided that THIS WEEKEND we are going to try and all share the bed.  Now THIS should be interesting.  In the meantime, I wander in the middle of the night and we all get to go out.

So yesterday she took us all out and then announced that she would be sleeping in.  She had her alarm set, for the VERY late hour of 7 AM.  She HAS to get up at that time no matter what, because I need my medication at 7.  Anyway, after the 3 AM walk-about she fell SOUND asleep.  But before she went back to sleep, she gave each of us a treat.  But not just ANY treat.  She gave each of us a piece of Honey Beefer.  I think I have talked about this locally made canine delicacy before.  It’s dried beef.  Mixed with honey.  And there is not a dog on this PLANET who wouldn’t like Honey Beefers.  I guarantee it.  Even Picky Picard scarfs it down…

So we went back to sleep at 3 AM,  but  we woke up PROMPTLY at our usual time of 5:45.  However, my human was still sleeping.  But we were hungry.  And it seems, in my human’s half sleeping state at 3 AM, she left the Honey Beefers on the counter…

When my human got up at 7, she wandered into the kitchen and then noticed the FG flinging something in the dining room.  Tiny pieces of plastic.  Now what on earth could THAT be, she wondered.  She went and pried a piece out of his mouth and could partly read the label on the plastic. “Hon…”.  And she immediately recognized the color of the label.  She ran to the counter and sure enough, the BRAND NEW FULL PACKAGE of Honey Beefers was GONE.  We all looked at her with innocent eyes.  “Who did this?” she asked as if one of us would miraculously have the ability to speak and shout out “It was ME.”

But unfortunately, unlike the other day after the power outage, this time, Big Brother was working.  She attempted to roll back the video footage.  It was tricky, because, of course, this happened while it was still dark out.  BUT, she had left a light on in the dining room.  She kept scrolling and scrolling though the footage.  And suddenly she saw no one on the screen.  No one was in the dining room.  And although she couldn’t SEE what was happening in the dark kitchen, she could hear the rustling of paper or plastic.  And then, out of the darkness and into the light of the dining room a figure emerged.  Carrying a package of Honey Beefers.  It was…..me.  BUSTED.  I proceeded to rip open the package with the assistance of Einstein, and eat all the Honey Beefers.  I think the FG was in the kitchen, checking to see if there were any more packages of treats.

My human was NOT impressed and she worried that I might have some dietary issues – but as of last night, no problems.  We’ll see what today holds.  While she is at work.

Have a good one! Peace and paws up!!