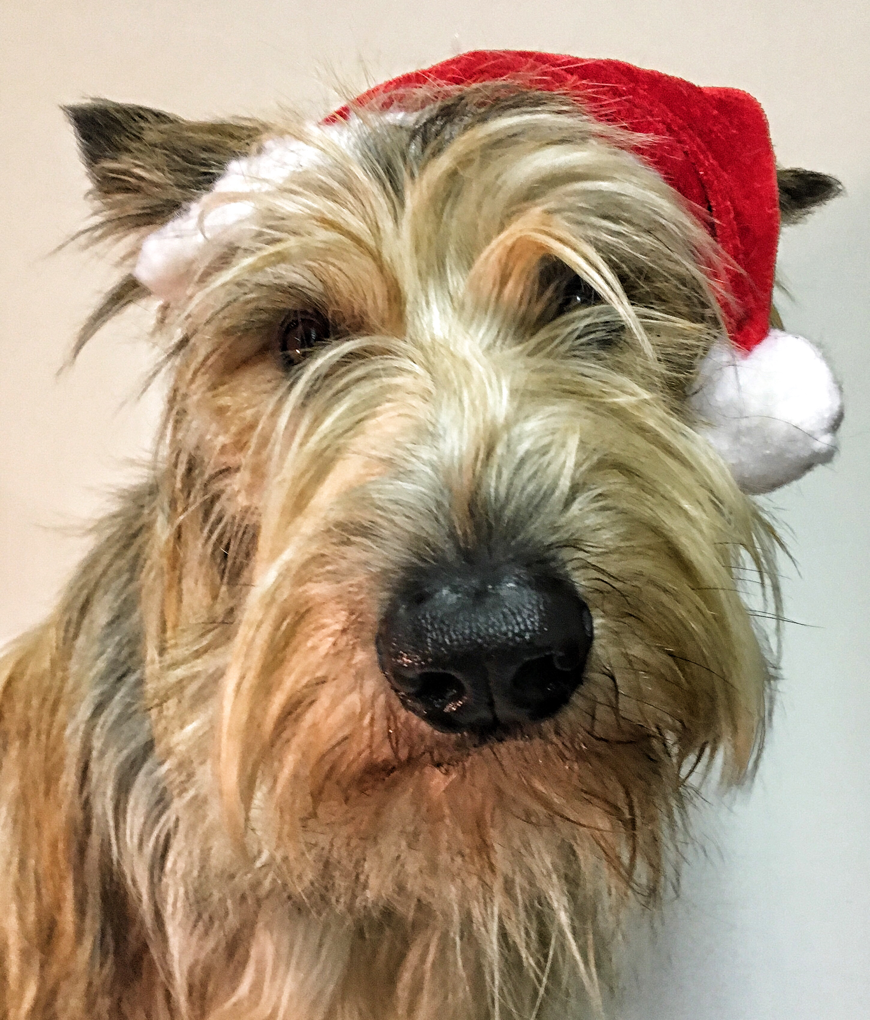 Oh my.  It’s into Boot Camp for the FG. Serious Boot Camp…

Yesterday morning we actually let my human sleep in until 6:15!  Could be because we know she has an  “in” with Santa – so we wanted to get on her good side. Einstein and I went for our walks first and it was getting bright enough that we could go for a walk on the trail.  We had a great time and cut through the golf course on the way home.  It was cold out and snowing lightly – and there was a dusting of snow on the ground.  Then it was the FG’s turn to go out on what I call some would call a suicide mission.  You know how legend has it that a full moon will bring out werewolves ?  Well cold weather and a Picard brings out a Tasmanian Devil.  Although he was wearing his usually controllable trusty Freedom harness, all HE wanted was freedom.  He kept spinning around and attempting to chew through his leash.  I mean he was biting down on that leash so hard so he could be free.  At one point, he and my human were on the golf course and he suddenly bolted to the end of his leash – and she let go in order to stay standing.  He immediately grabbed hold of the handle on the leash– and he was gone.  He ran like a gazelle being chased by a cheetah.  Mind you – a slow cheetah.  He actually stopped  to sniff something as my human approached and she jumped on the leash.  Busted. He immediately went into bucking bronco Tasmanian Devil routine.  She calmly waited for him to end his temper tantrum before they moved on.  It was a slow walk home.

After breakfast, my human decided to take each one of us, one at a time, down along our looped trail to the lake.  I got to go first, otherwise I would have been  screaming my lungs out. I knew she had very tasty treats in her pockets – so I never strayed once.  I ran along, got treats, posed for some photos, got treats – and had a lovely walk.  When we got back to the house we even played fetch for a while before my time was up.  Then it was the FG’s turn.  Now keep in mind that he has not been off leash in ages. Add to that the cold weather.  My human put on his long line, and opened the front door, thinking he would go after the fetch toys that were sitting outside.  Nope.  Like a rocket leaving a launch pad – he was gone.  He bolted for the trail.  With my human in hot pursuit.  She knew she couldn’t lose him because his long line was leaving a distinct trail behind him in the snow.  He was headed for the lake.  When she got there, she expected to find him wading in the water or at very least drinking it.  Nope – no sign of him.  She looked up the other part of the trail and saw his leash marks in the snow.  Up the trail she ran.  As she approached the house, she heard him in the bushes – and caught a glimpse of him – heading for the trail.  Again.  She took off after him and saw him for an instant as he dashed back down toward the lake.  And again, he was not there when she got there.  So she followed the second set of leash marks back up to the house.  She went around the house – and now saw that he was headed to the neighbor’s place.  She ran there and saw him.  He was standing in their driveway, near their house, barking,  at nothing.  She cautiously approached.  And of course, as soon as she got within 5 feet of the end of the last long line, he bolted.  He figured he was already in hot water – so why not make the most of his escape?  He headed to the next neighbor’s place.  My human again got within 5 feet and he was off.  This time he headed up their driveway, went a shot distance on the road and headed down the driveway of another neighbor.  And then my human heard more barking.  This neighbor is VERY nice, but generally stays clear of us dogs – my human thinks he may be nervous around dogs.  She looked down the driveway and there was the FG, doing a play bow and trying to get the nervous neighbor to play.  She shouted to him that if he could grab the end of the leash, it would be a great help.  The neighbor stood there frozen.  Who could blame him.  Here was the wolf-like crazy creature barking at him and his crazed owner running down the driveway.  I would be frozen too.  Anyway, my human got close and practically fell on the leash.  Busted! She apologized to the neighbor, who apparently just seemed relieved that the wild beast was caught.  She then proceeded to drag the FG home without saying a word.  She didn’t want to appear angry as he would then never want to come back when he has a running streak so she held in her fury.  She got him home, and collapsed on the sofa.
My human realizes, though that while this story IS somewhat amusing, she really cannot trust the FG off leash.  At all.  So they need some serious work on his recall. This story ended fine – but it really could have ended differently – and she realizes she would have no one else to blame.  So it’s recall Boot Camp for the FG.  It won’t be easy – but if she makes it fun, she is hopeful that they CAN make his recall at least somewhat better!!!  Come to think of it- we probably ALL could use some Boot Camp training.

I’m thinking the FG is going to really need to do some serious begging in his letter to Santa.  You know, it’s kind of nice to pass the bad dog title on to someone else these days.  Good thing he’s cute…

Sent from my iPad