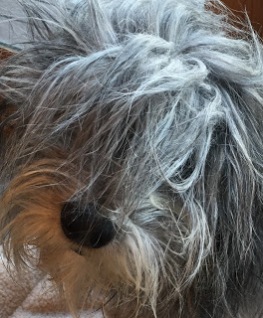 So on Saturday morning around 4 AM, Frodo and I woke up.  I jumped off the bed (where we dogs are not allowed to sleep) – and Frodo was standing on the alert  in the bedroom doorway.  We woke my human up – because when we move suddenly, it either signifies that someone is going to be sick – or we have heard something.  My human looked at us and we showed no signs of making the dreaded urky-gurky sound (that telltale sound that someone is going to be sick) and she heard nothing else unusual.  And we were not barking so it didn’t appear whatever we heard was particularly ominous like a rabbit – or rustling leaves.   So she rolled over and went back to sleep.  Only to be awakened about a half hour later by something she heard this time herself.  Thunder.

Now thankfully, neither of us is really afraid of thunder.  But apparently many dogs are.  And some say that we can detect thunder even before it happens due to changes in barometric pressure.  Perhaps that’s what happened with us the other night.  For dogs who are afraid of thunder, there are a variety of ways that are supposed to relieve their fear including, desensitization training; playing competing sounds (like music) during a storm; allowing the dog to go to a safe, comfortable place, like a crate;  or using something called a Thundershirt.  The Thundershirt is a tight fitting wrap that is supposed to exert pressure on soft tissue, resulting in reduced anxiety.  Even the famous professor of animal science, Dr. Temple Grandin has done some research on the effectiveness of the Thundershirt.  There seems to be some evidence that use of the shirt combined with behavioral modification and use of medication, may reduce heart rate and anxiety.  More detailed outcome studies need to be carried out.

We don’t have Thundershirts because we don’t really need them – but my human wondered if wearing our lycra bodysuits would work similarly to exert pressure and cause a calming effect.  Unfortunately, I think those suits cause the OPPOSITE effect.  We want them to come off – so we go EXTRA crazy.

All this talk of thunder made me think of a new name for myself.  The God of Thunder was Thor.  I like that name.  I think I’ll now go by Thor from now on.  It’s easier than Balthazar and I like it better than Cocoa.  My human made me include this photo – she said it’s perfect because it looks like I was hit by lightning.  Ha. Ha.  Humans sometimes think they are funny.  But remember, Thor always gets the last laugh…and the last rumble.

Have a good one – I hope your skies are sunny.  And quiet.