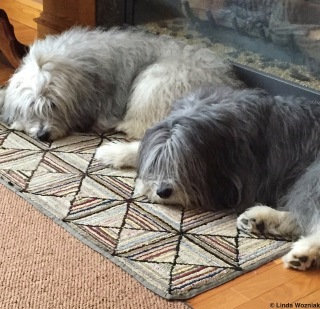 The truth comes out.  Remember how I mentioned that our good behavior record, while our human was away, was tarnished by the screen door – with the hole in it?  And remember how I admitted guilt in the crime?  Well.  Guess what?  It WASN’T me – and the criminal was CAUGHT!
You see, Frodo did it – but convinced me to act as the scapegoat, because, well I usually AM the one who does something bad!  He promised me some kibble and I fell for it.  BUT – he was exposed as the culprit when my human went to groom us when she got back from her trip…
Grooming me is generally not a difficult task.  But Frodo?  Mr. “Good Behavior”?  Not so much when it comes to grooming.  It’s like a scene out of a wrestling match at the Olympics.  With all of the grunting and groaning included – most of which is done by my human.  Anyway – as my human was brushing Frodo, she came across what she THOUGHT was a mat.  She carefully pulled it out of Frodo’s back leg and then took a closer look.  The MAT was made of metal.  Hmmmmmmm.  She looked at it more closely.  Velcro?  No.  A scrub brush?  No.  It was screening  from the door!!!!  And not only did she find ONE piece stuck in his coat – she found TWO!  Busted.
Haha big brother.  Guess you’re not such a big deal after all.  But.  Can I still have that kibble?
©  2015 Linda Wozniak