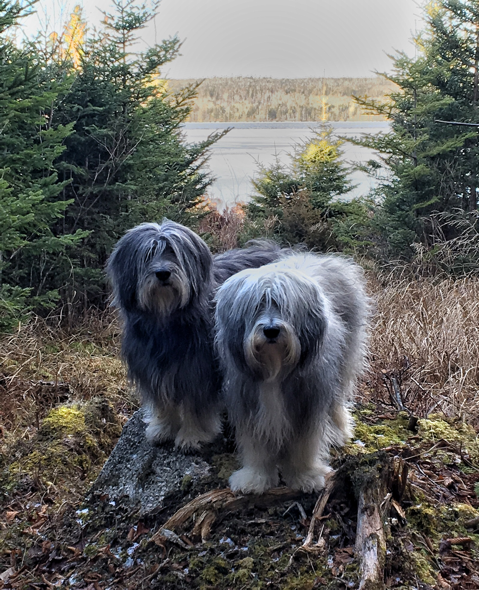 Well last night was the annual old-friends-drinking-wine-at-Christmas-time celebration.  My human has this old friend who she has known for 35+ years – since she first moved to Nova Scotia.  And although they no longer live near each other, they stay in touch, and when her friend visits our neck of the woods, they try to get together.  And every Christmas, they make it a point to meet up – usually at our house, and sit for hours, drinking wine, eating junk food and laughing at old stories.  Einstein has heard the stories told over and over again, and rolls his eyes – but they somehow manage to delight in the tales – and enjoy them as if they have never been told before.  Oftentimes, the stories relate to us canines.  And canines that have come before and are no longer with us.  And most of the tales are about canines behaving badly.  Which is QUITE ironic because you see, both of these humans are WELL VERSED and knowledgeable about behavioral training techniques.  I mean they BOTH know about positive reinforcement schedules and rewards and how to shape behavior.  So in THEORY, one would think that both of them would be owned by extremely well-behaved dogs.  Nope.  My human’s friend was once owned by an Australian shepherd who demonstrated flight risk behavior his entire life.  He even disappeared once in the middle of the night during a snowstorm when he got off his leash, leaving my human’s friend crying in the middle of a snowbank.  Luckily he returned and she managed to fling herself onto him as he reappeared out of nowhere racing by.  Sounds familiar.

And then there is the story of how a certain Bernese Mountain Dog named Guinness, managed to get into the DFZ during one of these Christmas gab-a-thons, when they were not watching, and grabbed an entire cheese log off the coffee table.  And then the story of when her friend accompanied my human on a final visit to the vet with another Bernese.  Tears for happy times and sad…

Last night the party nearly ended before it began, when my human’s friend bent over to pet me and the FG wanted to say hello and gave her a head butt in the process.  Thank goodness he didn’t knock her out – and thank goodness she is SUCH a good friend, because she just laughed as she staggered into the kitchen.  A trip to the emergency room with a concussion would have put a real damper on the evening.  She definitely deserved a glass of wine after that collision.  More than one glass..

Old friends are truly something to be cherished.  And while you may not be able to spend time with them often,  when you do, it is as if no time has passed.  I hope each of you has at least one special friend like this – and if for some reason you don’t, may you make a new treasured friend in 2018 and share in that unique bond.  Just like you do with us canines!  And nowadays, the internet also allows us to make new friends around the world.  Many we may never meet – but the virtual friendships that we have also provide a unique connection!  So cheers to friends – old, new, near and far! And let’s close with a quote that was shared with my human and written by C.S. Lewis:

Friendship is born at that moment when one person says to another: ‘What! You too? I thought I was the only one.

I wonder if that quote was written with reference to being owned by bad dogs….