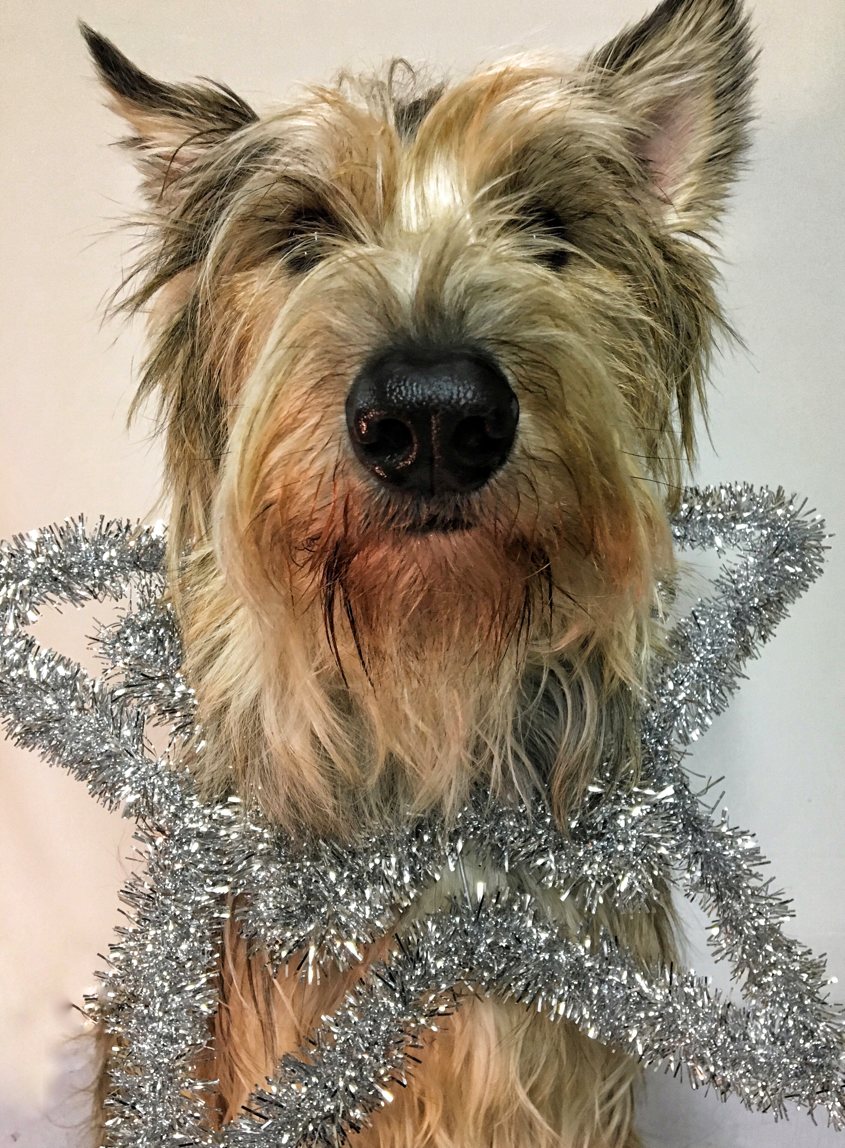 I read somewhere that the average age for dogs being left at shelters is 18 months.  Close enough to 19 months.  The age of the FG…

Now before you think he is going to a shelter – I assure you he is NOT.  BUT – I understand why people surrender dogs at this age.  I think it’s called the teen age stage.  Was I ever THAT bad?  OK – don’t answer that – I’m STILL bad – as evidenced by my reckless behavior on Christmas eve.  And let’s face it, if given the chance to chase a bunny….I still would do it.  But after my chase-a-thon, I come home.  And there is a PURPOSE in my running.  Not the FG.  He likes to run – just to run.

Yesterday was Boxing Day and of course my human is still off.  And sleeping on the couch.  I think she just likes to look at the Christmas tree.  At 5AM, I was squeaking to go out.  So she threw a coat over her pajamas and fuzzy robe and took me out.  And then she took Einstein out.  And the FG.  And then she fed us, marched back into the DFZ and stayed there until my pill alarm went off at 7AM. As soon as it was bright out, she figured she would take us for REAL walks – so she could then enjoy her breakfast.

The FG went first  And since there was no one up at the golf course, she figured they could have a good walk up there.  It was cold out, but the winds had died down from the day before.  As I understand it, we were lucky that our power was restored so quickly – some people are still without it.  Just as they got up to the club house, the FG unexpectedly bolted.  Now he was on a long leash and wearing his harness , but he surprised my human and she let go.  If his brain cells were pumping out power at that instant, he could have restored lights to many homes.  He KNEW he was free – and he QUICKLY grabbed the end of his leash.  My human watched in horror as he eyed the road (keeping in mind the golf course is at the end of the  dead end road – and there is NO real traffic at this time of year, except for residents – but she didn’t want to take ANY chances) – so she raced for the fairway.  And he raced behind, passed her like a rocket and was G.O.N.E.  She didn’t even bother to call him – she knew it was pointless.  He ran like an animal who was released into the wild after living in a zoo for 50 years.  And boy can he RUN.   He raced WIDE circles around my human.  And she kept running too – she wanted to keep him in the open fairways – and not off to the sides of the course – which border the woods.  She found a small group of trees between two fairways and hid.  When he came looking, she didn’t try to catch him, she just found a stick on the ground and started playing with it.  He showed some interest and walked toward her.  Then like lightning, those brain cells shouted “SHE IS GOING TO GRAB YOUR LEASH,”  so he turned and RACED away – this time WAY away.  At this point my human decided to call in reinforcements.  She figured Jackson’s humans might be awake and if Jackson came to the course, the FG would definitely go to him.  And Jackson is good at going to humans.  So she called but there was no answer – so she left a message to call her ASAP.  In the meantime, the FG reappeared – huffing and puffing from his run.  And wet.  Clearly he had been in one of the ponds – which are not yet frozen.  My human again hid behind some trees.  And he didn’t come.  Frankly, he didn’t care.  So she went to look for him and then spotted a miracle walking across the fairway.  Jackson and his human!  They had actually not heard her panicked message but had decided to come up for a walk too.  What luck! And sure enough, the FG raced over to them and within seconds was back in captivity.

Now my human was reluctant to tell this story – because she KNOWS people will shake their heads and say “that dog needs to learn a recall!”  And, trust me – she knows that and  they are working on it.  Daily.  But she isn’t even attempting to use the whistle outside yet – it would be pointless.  She won’t blow that thing outside until she is 99% certain he is going to return.  For those wondering – we DO have a fenced run outside our house.  Which is fine – but clearly not enough space for the FG to REALLY run.  We also have LOTS of property – but fencing all of it would be very costly.   We could fence the back lawn area – which would give good running room…perhaps we could put out a call for volunteers in the spring to help with the construction part!  In the meantime, my human figures no more long leashes.  Something about the physics of a long line versus a short line points to the fact that she has more control on a short line.  She also needs to find a good fenced area in the meantime where he could run.  She is not wild about dog parks.  Too much potential for problems – not to mention that we had a bad problem with leptospirosis at a couple of parks this fall – and although the bug has probably been killed off by the cold, my human doesn’t want to take any chances.

We know the FG is young and silly, but she wants him to be SAFE.  She was exhausted by the time she got home, but knew Einstein and I wanted to go out too.  She grabbed our leashes – but actually let us be free and we went down to the lake on our trail.  We practiced recalls, and gave the appearance of being well behaved.  We knew she had good treats in her pockets. Who KNEW Einstein and I could be so good.

If anyone in our area reads this and has a suggestion on where to allow the FG to go and run off some steam – safely, let us know.  In the meantime, he will be on a SHORT leash and will continue to work on that recall.  Just how long does this teen age stage last?