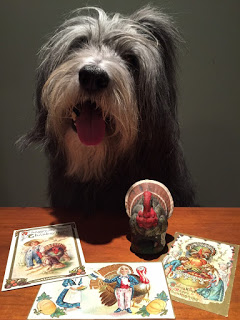 November 24.  And the fourth Thursday in November.  So what does that equal in the USA?  Thanksgiving!  And the holiday this year is predicted to have the most travellers in 12 years.   Sources say that 50.9 MILLION people will travel more than 50 miles from home – with the majority doing so by car.  And if you are in the group travelling by plane, expect that waits could be long as almost all flights are FULLY booked.  Whatever you do,  don’t sleep in and miss your flight!

It is estimated that over 44 MILLION turkeys will be consumed today – as more than 85% of Americans have turkey as the main course today.   The average American is said to gobble down 3000 calories on Thanksgiving day – with 50 million pumkin pies consumed across the country.  Whoa.  I wonder what the average dog eats on Thanksgiving?  We canines CAN have a bit of turkey – but not too much as it could cause dietary “issues” later.  And hold the gravy – for sure.

I found this commercial video that depicts dogs having quite the holiday feast.  It  just bugs me that a CAT is at the head of the table…..  Check it out.

But what I really found interesting was THIS video – which shows how they filmed the commercial.  Some pretty patient people and obviously, very well behaved canines!!!

So Happy Thanksgiving to all my friends and family in the USA.  And no matter where you live, be thankful today for the many good things in your life.  Humans often tend to focus on the negative things in life – and what they don’t have… But take a minute today to think of the many things that you DO have – like even the ability to read this blog (!)  and remember to give thanks.  Oh and don’t forget to give thanks for your dog – and maybe give him or her an extra treat – just to show your thanks!

Have a good one!  Peace and paws up! And thanks to you for taking time to read my blog!  I truly appreciate it!