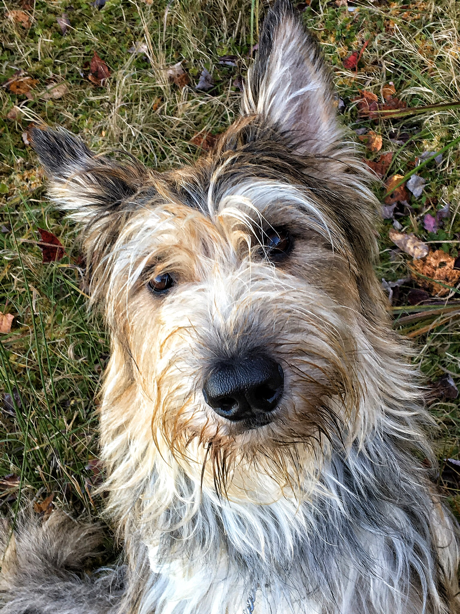 Hey – ever hear of that video game called Pokemon?  Personally, I have never played it – I’m STILL waiting to get my OWN iPawd. Anyway, I guess the game has been popular for a long time.   Well we have our OWN version of a game.  It’s called PokePON.    It is generally played by a Picard.  At least the Picard in this house.  The one with the death wish.

Here are the rules:
1.  A PON must be engaged in some stationary activity – like drinking water, or chewing on a bone.
2.  The Picard must quietly and stealthily approach said PON from the rear.
3.  The next step is for the Picard to poke the PON in the rear end with his nose, or his paw.
4.  The Picard must then jump backward as if having received an electric shock, and must dodge the teeth of the irritated PON.
5.  After the jump, it is ESSENTIAL that BOTH dogs bark during the game.

The game is usually continued until the human in the houselhold can no longer tolerate the PONdemonium.

Sometimes one will see tufts of PON hair rolling across the floor when the POKE includes a grab.  As well, tufts of Picard hair are also observed when said Picard doesn’t jump back quickly enough.  But keep in mind, that this does NOT deter the Picard from playing the game.  Ah yes. Fun and games….

Thanks for all of your birthday wishes yesterday.  As usual, I received more than my human.  But who is counting?

It’s SATURDAY.  My human is home, so no doubt there will be LOTS of games played today.  Including PokePON.

Have a good one.   Peace and paws up!