Today is October 16 and according to the crazy calendar, it’s Learn a Word Day. I COULD give you some real canine vocabulary words – but I prefer my own Viktionary terms.  And I have a few new terms for your ever-growing Vikabulary.

Canidascendaholic.  n.  A dog who likes to constantly climb onto something to assume a greater vantage point.  It can be outdoors, like on a rock or hill or indoors – on furniture- particularly the back of a sofa. 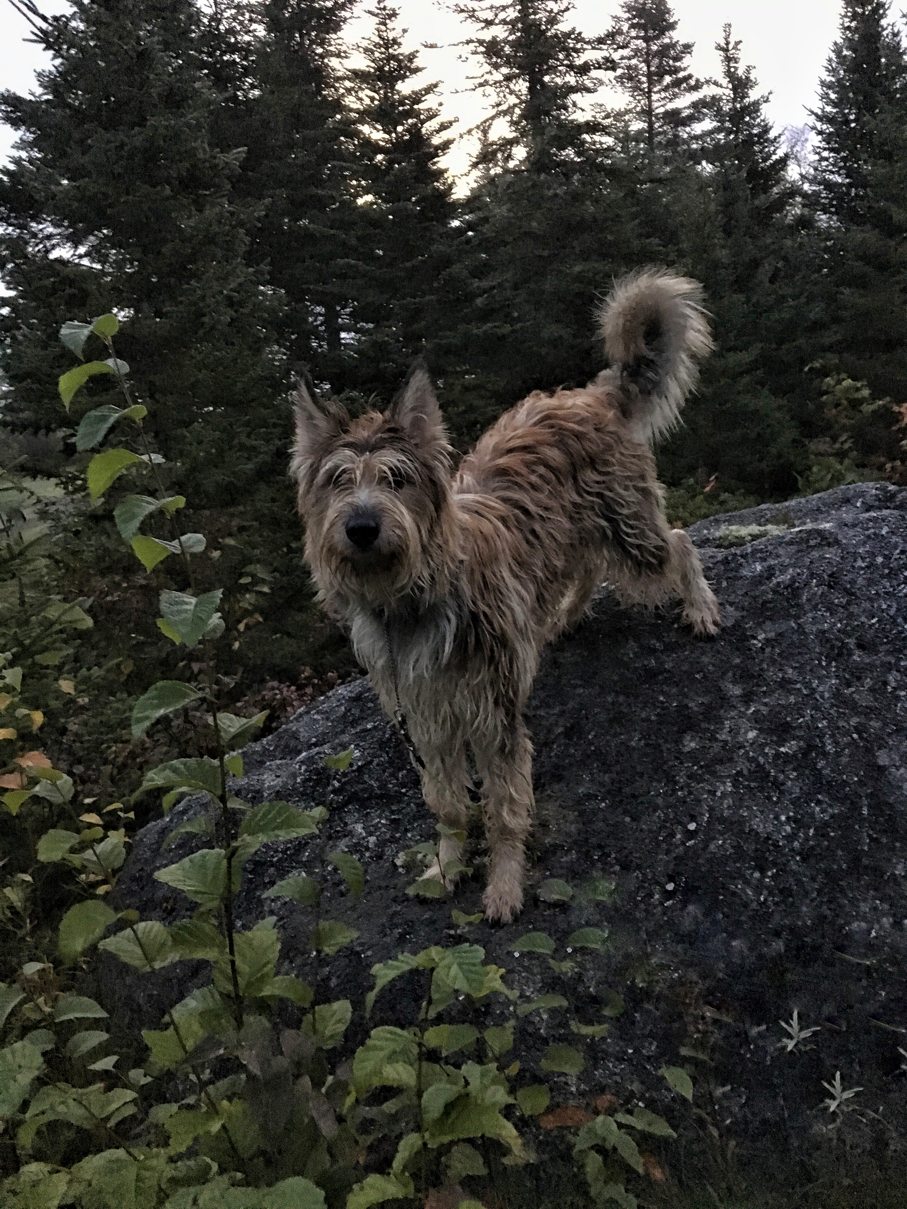 Lately the FG has begun to demonstrate his skills in this area.  When my human walks him, he has rocks that he loves to climb.  He jumps up and surveys the landscape.  Just as he surveys the counters at home. But thankfully he doesn’t jump up there.  Yet.

Obsesslipper v. to obsess about a human’s footwear.  The obvious being slippers.  Which of course leads to a story….My human had this pair of fuzzy slippers that emerged from the closet as the weather has started to become cooler.  UNFORTUNATELY, they have seen better days – because one Picard, who shall remain nameless, chewed holes in both toes.  While my human was wearing them.  Not at once, mind you.  Just a little nibble while she would be eating breakfast.  Or supper.  And before you knew it, both slippers had holes in them.  So yesterday she went to Costco.  For those who don’t know Costco – it’s this huge warehouse-like store where you buy things in bulk.  And you pay a membership fee to belong.  The thing about Costco – you go to buy papertowels, come home with $200 worth of “stuff” and you forgot the papertowels.  More than one dog bed came from Costco back in the day when my human was owned by dogs who wouldn’t DESTROY them.  Anyway – she went to Costco and saw these slippers – made of a fuzzy fleece-like shearling material.  So she decided the price was right and came home with them.  She put them on in the garage before she came in the house.  Well.  The FG’s brain exploded.  He noticed them IMMEDIATELY.  And he WANTED those slippers.  My human nearly tripped trying to keep the slippers ON her feet and one Picard OFF her feet.  We PONs didn’t care at first – we were waiting for supper.  When I FINALLY did note them later, I tried to steal one.  My human said “Hey – you don’t even LIKE sheep.  Leave the fleecy things alone.”  Sure I will.  But just don’t leave those things alone…

mannernesia  n.  the total loss of memory for manners when encountering guests.  Or neighbors walking down the road.  Words like “sit” become like a foreign language.  This is seen, even
on occasion, with those of us who have OBEDIENCE titles.  We DO know what to do. We simply like to embarrass our human.  Payback for having to wear a holiday attire.

So that’s it for today.  It’s Monday and my human is usually off on Mondays, but today she has to go in.  We’ll be on constant guard duty while she is gone.  And looking for those slippers…